Donate
You are here: Home / Latest News / Business Insider reports how easily developers get round ‘right of first refusal’

LONDON – A few words in a law designed to protect homeowners appear to have been used by major housebuilders to sell off freehold rights to investors, leaving the ultimate ownership of flats in the hands of hidden investors. The Landlord and Tenant Act 1987 was introduced to protect homeowners from soaring service charges and unfair leasehold practices. 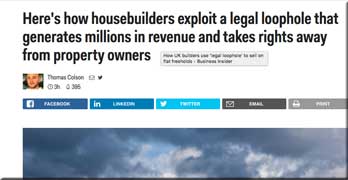 The Business Insider website reports that the right of first refusal is easily worked around by developers and gives a few examples.

The article by Thomas Colson shows how it is perfectly legal for developers to hold the freehold of a block of flats in an associated company and simply sell that vehicle on to ground rent speculators.

It cites the example Persimmon Group (No 3) Limited registered on July 14 2009, as an associated company of Persimmon. On November 19 2014 it was re-named Adriatic Land 2 and its single share ownership transferred to Adriatic Land 2 Limited.

In common with all Adriatic Land freehold owning companies the ultimate beneficial ownership is hidden behind nominee directors of the private wealth management firm Sanne Group, based in London and Guernsey.

The Adriatic Land freeholds are managed by the Long Harbour group of William Waldorf Astor, heir to the viscountcy (and half-brother-in-law of former Prime Minister David Cameron).

Mutiple homeowners have reported having the ownership of freeholds on their homes transferred to the network of Adriatic Land companies without their prior knowledge.

“Business Insider asked Persimmon if the associated company was registered for the purpose of selling freeholds without first offering tenants the Right of First Refusal, but it did not respond to a request for comment by the time of publication.”

The article then considered Seaton Group SPV 5, Bellway XI, and Bellway XII, all registered to Bellway, a FTSE 250-listed builder, between April 2009 and April 2013.

“Business Insider also asked Bellway if the associated company was registered for the purpose of selling freeholds without first offering tenants the “right of first refusal”, but it had not responded to a request for comment at the time of publication.”

“In my experience developers and non-developer landlords who were correctly advised were certainly circumventing the obligation to offer freeholds to leaseholders in this way.”

She added that developers contracting “with a third party, often a regular ground rent investor, before any of the flats have been sold” is now the more common work-around.

This is also LKP’s experience.

“This means when they come to complete the sale of the freehold to the third party, the Act does not apply because the developers are obliged to sell the freehold under a pre-existing contract,” says Miss Fitzpatrick.

If you want to reform leasehold, this is how you could do it

In an LKP Westminster all-party round-table meeting for MPs in January 2015, Philip Rainey QC referred to the 1987 Act as “one of the most ill-drafted pieces of legislation ever inflicted on us”.

He added: “Now that we have collective enfranchisement, lease extension rights for all flats and no-fault Right to Manage, the right of first refusal is in principle redundant.”

LKP is quite surprised that the dukes of Westminster and Buccleuch commercial interests, and possibly Native Land, did not take steps to avoid right of first refusal at the prime London site Neo Bankside, where the freehold is currently on sale for £4.8 million.

The creation of the National Leasehold Campaign
Next Post: Now Bovis says ‘Our houses are freehold’. (Gleeson’s always were …)