Donate
You are here: Home / Latest News / Taylor Wimpey gets round ‘right of first refusal’ to buy freehold by selling the block BEFORE more than half flats are sold

Taylor Wimpey avoided having to offer leasehold flat owners the “right of first refusal” under the Landlord and Tenant Act 1987 because it sold the block before more than half the flats were sold.

The issue was raised by Sean Greenwood, whose wife owns a two-bedroom leasehold flat at Goodrich Mews in Gonal, Dudley.

Mr Greenwood estimates that over the life of the lease the freeholder raise £21,672,000 in ground rent from the 32 apartments.

The reply came from Cheryl Parsons, Taylor Wimpey’s head of customer services who also appears to be the spokesman for the company’s £130 million Ground Rent Review Assistance Scheme.

“In this case, please note that there was no requirement for Taylor Wimpey to offer the right of first refusal to residents of the Goodrich Mews apartments because the company was already contracted to sell the freehold to the apartment block to a third party before a ‘requisite majority’ of qualifying tenants had purchased units in the block.

“As you may be aware, the Landlord and Tenant Act 1987 defines a requisite majority as 50% +1 of the units on a development. We confirm that the contract to sell the freehold to the apartment block exchanged prior to the sale of the 50%+1 unit.

“As we mentioned previously, the Ground Rent Review Assistance Scheme has been introduced voluntarily by Taylor Wimpey to allay concerns that have been raised by our customers regarding the possible saleability and mortgageability of their home.”

Mr Greenwood forwarded the reply to media and MPs.

“What is the point of having a law to protect leaseholders that has such a huge loophole in that developers know about and are clearly using?” he asks.

“The residents were notified that the freehold had been sold in writing on March 29 2012 [see below].

“The three blocks of apartments were completed in late 2009, 2010 and 2011 respectively, with the apartment sales being agreed long before these completion dates. Taylor Wimpey is either lying about the freehold sale date in order to circumvent the law or had agreed the sale of freeholds long before the apartments were sold without disclosing the ownership structure to potential buyers.

“I have asked Taylor Wimpey to prove the freehold sale date as evidence that the law was not broken.

“Taylor Wimpey’s ex customers continue to be trapped in homes that they want to sell, but cannot.

“We are now being told that there MIGHT be some progress on varying the leases by the end of the year.

“Thousands of people’s lives are on hold due to the mis-selling of homes.

“Nobody would have bought a leasehold property if the implications and future costs had been fully explained. Like PPI mis-selling, people need to be compensated so that they are in a position to move house if they choose or buy their freehold and move on with their lives.

“What should have been a dream of owning a first home has turned into a daily living leasehold nightmare.

“We are suffering from something that is close to your heart: a greedy freeholder with a punitive lease that prevents us from selling our apartment.” 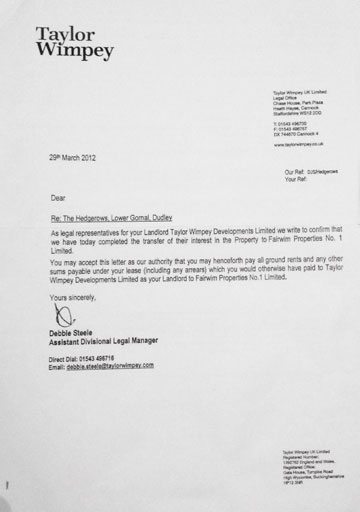 Woman signs up to doubling ground rent to extend lease on £70,000 flat. Is it now sellable at all?
Next Post: Ripped-off leaseholders bring protest to central Manchester