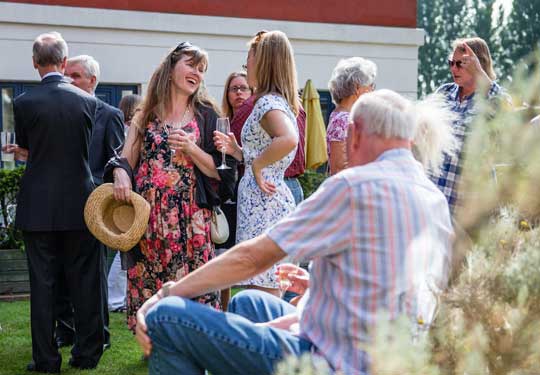 The residents of Charter Quay in Kingston were in full celebration yesterday having bought out the Tchenguiz interests at the site and sent the controversial freeholder packing.

A 30-strong choir sang uplifting songs extolling freedom, bunting with the different national flags of the residents flew from the balconies and local LibDem MP and Energy Secretary Ed Davey poured out Pol Roger champagne from an outsized ‘Balthazar’ bottle. 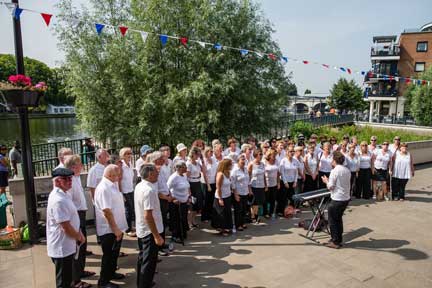 A plaque was unveiled celebrating Charter Quay’s epic campaigns against the “monstruous companies” that managed the site, as Davey described them. These include Peverel, which managed the site of 239 flats, five town houses, restaurants and commercial premises when it was under Tchenguiz ownership.

Buying the head lease off Tchenguiz has cost the residents at the high-end riverside complex £900,000 – it is on the Tchenguiz books valued at £3.2 million.

But in four tough Leasehold Valuation Tribunal rulings Charter Quay residents have won back more than £500,000.

In a speech to the residents, Davey gave fulsome praise to Martin Boyd, chairman of the Charter Quay Residents’ Association and co-director of LKP, as well as his predecessor as RA chairman, Derek Winsor.

“They were forensic in detail and they were so good I almost felt sorry for the Tchenguiz brothers. They did not know what they were taking on.” 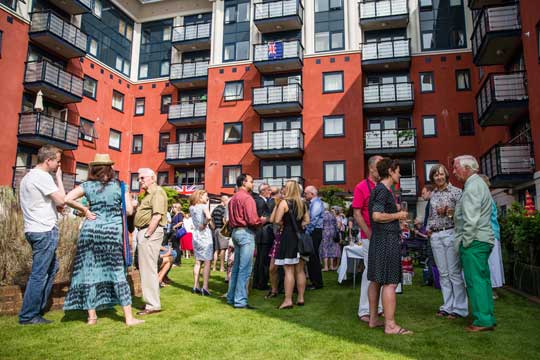 Sir Peter Bottomley, who could not attend owing to family commitments, offered his congratulations to the residents.

“Parliament, government departments with the courts and the Leasehold Valuation Tribunal should learn the lesson.

“The law is not working the way it should.”

Both politicians are determined to raise the issue of the Peverel price-fixing scandal for which the Office of Fair Trading, after a three-year investigation, is offering immunity from sanction on the questionable grounds that the property manager turned itself in.

This issue is now being raised with the prime minister, who has experience of the Tchenguiz / Peverel modus operandi in his own Whitney constituency.

Attention now focuses on the price paid for the site: £900,000 – which is the established open market value – is only 28 per cent of the value on the Tchenguiz books.

Heavily indebted to taxpayer-owned banks, the Tchenguiz portfolio, built up over the last 20 years, amounts to 250,000 freeholds, or one per cent of all the residential freeholds in the country. 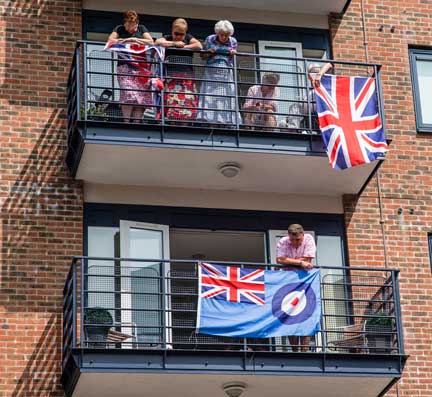 They have been on sale for more than a year at £3 billion, and borrowing against them saw Tchenguiz become one of the leading businessmen in the country, at one point poised to takeover Sainsbury’s.

Many of the freehold assets – such as the head lease at Charter Quay – were sold off by the high-end Berkeley Group, while others were bought from retirement developer McCarthy and Stone, Barratt and Kirklees council, which sold off the freeholds of Huddersfield in the 1990s.

Charter Quay’s purchase of the head lease concludes a series of acrimonious disputes that have seen the Tchenguiz companies pay back more than £500,000 in wrongly demanded service charges.

In the last of four Leasehold Valuation Tribunal rulings in November 2011, the court condemned the conduct of the Tchenguiz management company County Estate as “disgraceful”. Management fees had been loaded, contracts had been doled out to other Tchenguiz-owned companies and the cost of the insurance had been padded.

Terms such as  “glaring failure” and “unacceptable behaviour” appear in the judgment, and the tribunal dismissed the obfuscated company ownership structure of the Tchenguiz Family Trust, ultimately based offshore, as “quasi Biblical”.

The disputes at Charter Quay have echoed those at other prime London sites, such as St George’s Wharf where residents, who have included Sir John Major and Chelsea Clinton, received £1 million in a settlement of their disputes over service charges.

Peverel is the largest property manager in the country and was bought by Tchenguiz in late 2006. It was placed into administration after Vincent and Robert Tchenguiz were arrested by the Serious Fraud Office in March 2011.

The arrests were based on incorrect evidence and the brothers are now seeking £300 million compensation from taxpayers.

Sir Peter Bottomey, MP for Worthing West, told the Commons in April: “I would have thought that a handshake and an apology would solve that.”

“A whole series of other issues should, I believe, be fully examined under parliamentary privilege.”

Regarding the lessons to be learned from Charter Quay, Sir Peter said: “When a freeholder or the head leaseholder tries to frustrate the right-to-manage or to prevent purchase of the head lease or the freehold, the legal process should be low-cost, fast and effective.

“I ask Martin Boyd and others to make available the chronology so others do not suffer for so long or have to risk the uncertainties of litigation.

“Additionally, I understand that the purchase price of less than £1 million is less than half the declared value in company accounts.

“I expect every accounting firm to double check directors’ valuations. It would not be surprising to see widespread reductions in claimed asset values.

“Might there be too many other exaggerated claims of values?

“Are these based on unwarranted fees and charges overpaid by too many of the country’s three million leaseholders?”

What if Berkeley had built Charter Quay as commonhold? Site visit by officials and Law Commission

Cut out the nonsense and pay up for Peverel cheating! Cabinet minister tells Entwistle