CentreForum invites LKP to contribute to its leasehold report 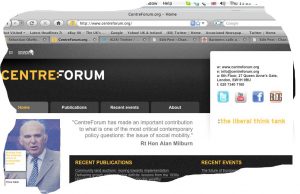 In three weeks time another important report into leasehold is to be published, this time by the liberal think tank CentreForum.

Earlier this month LKP was invited to its Queen Anne’s Gate to offer its contributions to report, which – we are assured – were gratefully received.

CentreForum had been alerted to LKP following its instigation of the House of Lords debate on the desirability of leasehold regulation, which took place last Monday.

Baroness Gardner of Parkes, who invited LKP’s Melissa Briggs and Sebastian O’Kelly to the Lords last month, was behind the move.

CentreForum’ has been researching the issue of leasehold since the autumn. Given that members of LKP have been behind the most outstandingly successful LVT actions in London, winning hundreds of thousands of pounds for leaseholders, CentreForum has wisely decided to ask us over.

Similarly, LKP-accredited managing agent Alan Coates, of HML Anderton has offered to contribute the benefit of his experiences to the report’s researchers.

They have already discussed the issues with Peverel executives at its offices in New Milton, Hampshire, and will undoubtedly benefit from an alternative view.

So far the report appears to be treading similar ground to the London Assembly’s hard-hitting Highly Charged, which was published last month. It is supporting regulation with licensed managing agents and an ombudsman scheme to provide the low-cost redress that LVTs have failed to offer.

The whole issue of LVTs – how they work, the costs, the barristers cleaning up at them etc – is to be examined further by LKP.

CentreForum’s recommendations are still being finalized and LKP is delighted to have had the opportunity to contribute to the report.

Speakers at next week’s MPs meeting on leasehold