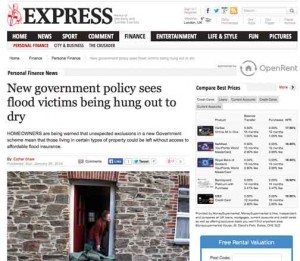 The Leasehold Knowledge Partnership joined forces with the British Property Federation and the Council of Mortgage Lenders to warn government that millions of homes would be excluded from its flooding insurance initiative Flood Re.

Leasehold properties, among others, would be excluded in the proposal.

This oversight has apparently caught the government by surprise and it is now seeking to make good the issue in the Lords.

The coming together of all parties with an interest in leasehold was significant because it is now becoming accepted that figures from the LKP are correct.

They show that the leasehold sector is far larger than is usually stated.

LKP will be publishing the full analysis of the sector shortly.

The full BPF press release is below:

Joint press release, backed by the Leasehold Knowledge Partnership, of the British Property Federation and the Council of Mortgage Lenders

The significant contribution of LKP to this is Martin Boyd’s first accurate statement of the numbers of leasehold properties there are in the country.

773,000 are in converted houses, which the group felt were the most vulnerable category to flooding.

The British Property Federation (BPF) and the Council of Mortgage Lenders (CML) are concerned that exclusions recently identified in the types of property to be covered by the Government’s Flood Re proposals will leave significant numbers of homes without the access to affordable flood insurance that had been expected. The BPF and CML believe that urgent amendments are needed to the Water Bill to reduce the number of properties excluded from access to Flood Re.

As currently defined, Flood Re will exclude most buildings cover for:

With almost 5 million leasehold properties thought to be in England and Wales, and over 4 million homes in the private rented sector, this means that the real number of properties excluded is likely to be millions, rather than the widely-cited estimates of 9,000 homes (see notes).

The rationale cited for the exclusions is that buildings insurance on such properties is deemed by the insurance industry to be “non-domestic”, rather than domestic. However, this is a distinction that only the insurance industry would perceive: the man-in-the street would undoubtedly regard leasehold flats as residential/domestic. Leasehold property such as flats, however, has to be insured on a block basis to ensure the whole building is insured.

And while some residential rented property will be insured by big organisations, the vast majority in the private rented sector is owned by individual landlords with one or two properties. Preventing landlords from being able to access affordable flood insurance will put significant strain on tenants whose homes are flooded and cause wider social harm to communities.

Speaking ahead of the second reading of the Water Bill in the House of Lords on 27th January, the BPF and the CML are urging the government to reconsider its plans, which will negatively impact a huge proportion of households and the industry.

Ian Fletcher, Director of Policy at the BPF, said: “Every property that is occupied is somebody’s home and investment. Flood doesn’t discriminate between freehold and leasehold, owner-occupation and renting, and it is of small comfort having contents cover if the building itself is left uninhabitable. If a property is at risk, regardless of its status, it needs to be able to insure itself affordably against disaster, not least because that is a condition of most mortgages.”

“Universality of flood cover is something that we think the citizens of the UK cherish and should not be given away so easily in this deal. Increased surface water flooding means you don’t need to live next to the sea or a river to be impacted by flood these days, it can happen to most of us. Depriving leasehold property owners, including millions of owner-occupiers, access to Flood Re is frankly unbelievable. There are many small leasehold blocks run by leaseholders who simply won’t be able to fight their corner in the insurance market and need to have access to Flood Re.  Also at a time when Government is taking so many positive steps to encourage investment in the private rented sector and promote responsibility in the sector, it seems extremely contradictory to exclude these properties from possible essential flood cover.

“Restricting the ability of landlords, particularly smaller ones, to insure their properties against flood risk will also impact on the speed at which communities recover from major flood events, if some properties are insured, but others are not because access to Flood Re excludes them. Tenants re-habitation process may be significantly drawn out and as a result local authorities will face the strain of providing lengthier temporary housing arrangements.”

Paul Smee, Director General of the Council of Mortgage Lenders, added: “We find it difficult to believe that the original policy intention was to exclude a whole swathe of residential property from the stated aim of ensuring that affordable flood insurance continued to be available across the market. Given that this appears to be an unintended consequence, we strongly urge legislators and the insurance industry to reconsider the proposals and ensure flood cover remains available on homes as people would expect.”

Michelle Banks, Chief Executive of the Association of Residential Managing Agents (ARMA), whose members manage around half of all leasehold blocks in England and Wales, said: “We absolutely share the BPF’s concerns. People need to be sure that they can continue to get affordable flood insurance.  By excluding blocks of flats from Flood Re, a large number of homeowners, particularly those in areas prone to flooding, could be put at risk of being unable to obtain affordable insurance for their properties. This could also affect the saleability of their homes. Surely that is not the intention of a government committed to increasing housing supply and promoting home ownership?”

The Leasehold Knowledge Partnership, a consumer group championing the cause of residential leasehold owners, commented: “Leasehold flats and retirement properties should not be excluded from the proposed affordable flood insurance cover being introduced under the new Water Bill. Leaseholders who pay for their buildings insurance through block cover are being excluded because they are being deemed commercial rather than residential properties.

“It will be the poor and the vulnerable who are put most at risk. We would urge the government to review its position and include all residential property”

Flood Re is intended to replace the ‘Statement of Principles’, under which insurers offered affordable flood coverage to the vast majority of households in return for Government maintaining its spending on flood defenses, which was felt to be untenable.

Leasehold owners attack council ‘admin’ charges
Next Post: Benjamin Mire has been in front of tribunal 52 times since 1999