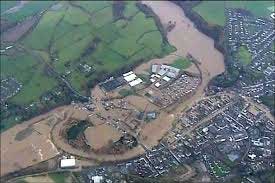 Leasehold flood risks: Readers may remember that DEFRA (Department for Environment, Food and Rural Affairs) had been persuaded to support a new affordable flood risk insurance scheme which guarantees flood cover for most homes. This scheme called “flood re” was promoted by the ABI (Association of British Insurances) as part of the Water Act 2014. Throughout that process one of the regular spokesman for the ABI was their head of property insurance Aidan Kerr.

The problem for leaseholders is that DEFRA was somehow persuaded to exclude almost all leasehold properties from “flood re” scheme on the basis that somehow there was no evidence leasehold homes face a problem in obtaining flood cover.

In April 2015 the regulations supporting the Water Act and “flood re” came into force. “Flood re” as a company has now been created to administer the scheme, which will become active from April next year. Until then the “statement of principles” that has historically sought to ensure cover for all homes remains in place. So only as we move to April 2016 will leaseholders begin to discover if they have a problem and by how much their premiums will increase.

Despite the whole leasehold sector telling DEFRA it could be wrong, the legislation now mandates that all leasehold blocks are excluded from “flood re”. The only exception is the tiny number of blocks owned as commonhold and those with three or less flats where the freeholder happens to also live at the site. This has increased leasehold flood risks issues.

In 2014 LKP forced DEFRA to disclose “I can confirm that DEFRA does not hold data that specifically relates to the impact of flooding in the residential leasehold sector”. So it had no evidence to differentiate between the flood problems faced by leasehold and freehold homes and therefore no means of knowing it there is any less a risk to leasehold homes than there is to freehold homes. Part of the correspondence can be read HERE and HERE

Of course when DEFRA and the ABI were deciding leasehold homes could be left out of “flood re:” in the first part of 2014 they did not know how many leasehold homes there were. At the time the only available figures were the old and completely inaccurate figures used by DCLG of 2-2.5 million homes in England. Since then LKP has persuaded DCLG to look at the numbers again and the leasehold sector magically grew to 4.1 million homes in the Autumn of 2014.

So how do most of these 4.1 million homes disappear? At a recent Westminster meeting the new head of “Flood re” – the company that will administer the affordable flood insurance their new chief executive, Brendan McCafferty claimed that all households are covered by the new “flood re:” scheme – save for those in the private rental sector.

When challenged about this “disingenuous” claim – after it was pointed out by a delegate that the vast bulk of leasehold homes are excluded from “flood re:” Mr McCafferty gave very long and rambling reply without ever once mentioning the word leasehold. There is no evidence of a problem claimed McCafferty in a vague way as he disappeared 4 million homes.

As for Aiden Kerr. The man  who often represented the ABI and helped persuade DEFRA to exclude leasehold homes from “flood re”. The Aiden Kerr who dismissed the LKP figures quoted by the Financial Times which suggested that 70,000 leasehold homes may be in the high risk flood category. The Aiden Kerr who said that everyone in the leasehold sector from ARMA to the Council of Mortgage Lenders to the British Property Federation were wrong. It turns out Aiden Kerr has been appointed Director of Operations for “Flood re” company. Mr Kerr’s appointment like a number of others subject to “regulatory approval”. However, moving offices will not be too difficult for Mr Kerr as “Flood re:” offices happen to be in the same building as the ABI.

In the mean time DEFRA have paid £90,610.00 for a market survey to understand if the public has concerns about flood insurance – although from the tiny number of leaseholders they contacted (6% of 1083 people in the survey i.e  65 people – page 11 of the report) any views will inevitably be highly speculative.  LKP would suggest the survey as far as the leasehold sector is concerned is worse than useless.  Although the research took place in 2014 and was supposedly published in July 2015 it is somehow difficult to find on the DEFRA web site. You can read the market research HERE. Readers may notice they only managed to contact a tiny number of leaseholders, did not ask them the right questions and did not even seem to understand that in most cases its the managing agents and landlords who arrange the insurance cover and would be the only ones to know if there were a problem

LKP continues to investigate what mechanisms are in place by DEFRA and “Flood re” to monitor what problems are faced by leasehold homes with flood insurance.

LKP urges minister to include leaseholders in Flood Re insurance plan

LKP lunch-time Friday lecture: How we made 2.1 million homes appear

Packed LKP meeting at Westminster for leasehold reform
Next Post: Right to manage promoter calls it a day at Quadrangle House