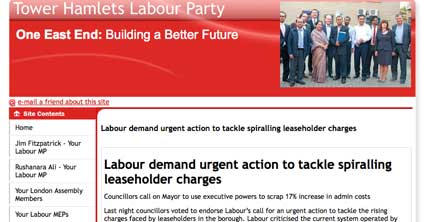 Labour councillors in Tower Hamlets, in east London, have called on the council to scrap a 17 per cent increase.

The Leasehold Knowledge Partnership has evidence of 29.95 per cent admin surcharges for leaseholders in Haringay, north London, on simple repairs.

The issue has been raised with the Office of Fair Trading for consideration in its report leasehold management by commercial chartered surveyor Joe Darwell.

He owns a leasehold flat in the borough in a four-unit council-owned block.

At Tower Hamlets councillors voted to endorse Labour’s call to tackle the rising charges faced by leaseholders in the borough.

Jim Fitzpatrick, the Labour MP for Limehouse and Polar, has probably the richest and poorest leasehold owners in the country in his constituency, which includes Canary Wharf and the council estates of the Isle of Dogs.

He raised issues at the prestigious sires West India Quay and Canary Riverside in the Commons on December 5 last year. You can read our report of the debate here

Labour criticised the current system operated by taxpayer funded Tower Hamlets Homes as “opaque and representing very poor value for money” as it meant that leasehold owners were regularly being charged for services they hadn’t received.

Questions were also raised about the 17% “overhead” costs which are added to many charges faced by leasehold owners. The councillors called on Tower Hamlets mayor Lutfur Rahman to use his executive powers to reverse the 17% increase, yet received no response.

The councillors demanded an explanation from the Mayor as to why only five of the fifty four recommendations of a landmark review into leaseholder charges had been implemented even though the review was completed in May 2011.

Full report can be read here