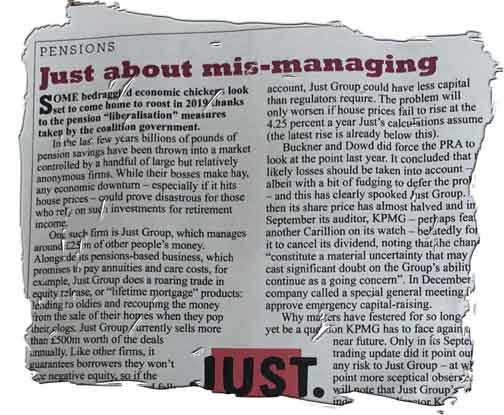 Dr Buckner, who retired from the bank’s Prudential Regulatory Authority last year has been working with Professor Kevin Dowd, of Durham University, to raise concerns whether equity release providers have sufficient capital to absorb falls in property values.

The Eye article concerns the Just Group, which manages around £25 billion of other people’s money.

Since pension “liberalisation” by the coalition government “billions of pounds of pension savings have been thrown into a market controlled by a handful of large but relatively anonymous firms”.

“While their bosses make hay, any economic downturn – especially if it hits house prices – could prove disastrous for those who rely on such investments for retirement income.”

Similar concerns have also been raised with the Prudential Regulatory Authority about pension exposure to overvalued ground rent investments.

With the Just Group. concerns over the prospect of a return to negative equity have resulted in almost a halved share price and cancelled dividends.

A depressing aside in the Eye article reads:

“The PRA’s recognition of the problem was itself delayed by years of lobbying from firms including accountants KPMG and EY, and by the Institute of Actuaries.”

Worse, a review of the accountants’ and actuaries’ regulator the Financial Reporting Council, suggested that actuaries – who measure things like likely future losses – be excluded from a new enhanced regulator.

That review was headed by former Treasury mandarin Sir John Kingman, who is chairman of Legal and General, “which has a sizeable share of the equity release pie and may have its own financial reckoning”.

Equity release, with its deferment calculations of a property’s future value, is an area of concern to leasehold reformers in addressing a fairer enfranchisement regime.

More broadly, the City interest in equity release is echoed by the desperate efforts by retirement developers to get their hands on highly valuable freehold properties.

Pure luck has given ageing baby boomers extraordinary wealth in their homes, no matter how unexceptional their careers may have been, and clever people want a cut of it.

Hence the marketing efforts by retirement house builders that pensioners trade in their blameless and valuable freehold homes for small but highly priced leasehold flats, whose dismal resale values can be seen on the Land Registry.

How scam values on equity release loans affect leaseholders. And YOU need to stop it …

Your Housing Group shared equity retirement flat sells for £39,129.26, after three years on the market