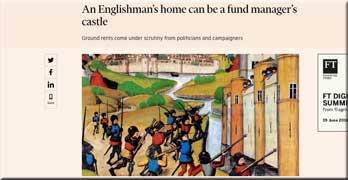 From the FT yesterday …

An Englishman’s home is his castle, but it may also be someone else’s pension if it’s a leasehold property.

Leasehold is the arrangement by which a homeowner only owns their property for a fixed amount of time with a separate landlord, known as the freeholder, owning it and the land it is built on in perpetuity.

There were 4.2m private residential leasehold dwellings in England in 2016 of which 1.4m were houses, according to the Department for Communities and Local Government.

In practice leases often have at least 100 years left to run before they revert to the freeholder, and in the meantime the leaseholder is bound by certain conditions, which may include requesting permission before they make external alterations and, most often, the obligation to pay an annual charge known as ground rent.

Traditionally apartments, in which the financial responsibility for the upkeep of a building is shared between numerous households, have been sold on a leasehold basis.

But in recent years there has been a growing trend for housebuilders, including Taylor Wimpey and Persimmon, to sell new-build houses using a leasehold model so they can sell the freehold as a separate asset.