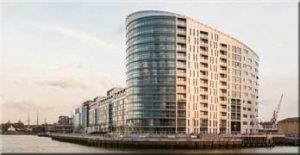 This week saw The Times, the Guardian and the BBC reporting on the ‘New Capital Quay’ site in Greenwich.This site is the largest privately owned development in the UK with ACM type cladding. Costs for replacing the cladding are being suggested at £20 million or even £40 million.

In an interview for ‘You and Yours’ on BBC Radio 4, Galliard Chief Executive, Donagh O’Sullivan, placed responsibility for the costs firmly with a warranty provided by the National House Building Corporation. He also explained that at the ‘New Capital Quay’ site the NHBC also acted as the building inspector during the construction phase.

NHBC counter the Galliard position by claiming that they need more information before they can fully review the claim. O’Sullivan dismissed this argument in the BBC interview, making clear that in his view NHBC had been provided with all the relevant information. O’Sullivan also made clear that Galliard will no longer be using NHBC to carry out inspection work during the construction phase of future Galliard building projects.

While these corporate giants place blame on each other, the leaseholders told the BBC they feel like they’re being treated like a “hockey puck”.

The Times reported on the story on 14th February:

In the report they state, among many other things:

“Despite being assured that the development in Greenwich, southeast London, was covered by a ten-year building guarantee they have been told that they could be held responsible for replacing cladding of the type that was used on Grenfell Tower.

In the meantime, Galliard has said that the cost of providing round-the-clock fire patrols at the £1.25 million development, New Capital Quay, must be met through residents’ service charges. Many of the residents do not have the money to pay the additional charges but cannot sell or rent their flats until legal responsibility for the cladding has been resolved. As of last March Galliard had retained earnings of just under £30 million.”

“30 fire marshals are patrolling the 11 buildings 24 hours a day at an estimated cost of £25,000 a week. But residents are concerned that wardens are not the solution.

Hyde Housing, which has interests in six of the blocks as well as being head leaseholder in two, said the situation was “very distressing” for residents. “We urge all those bodies involved in resolving this matter to do so speedily,” said Brent O’Halloran, the director of asset management at Hyde”.

On Friday 16th February the BBC ‘You and Yours’ programme was aired, including additional interviews with the leaseholders:

Nobody knows who will ultimately be required to pay to replace this defective cladding. This type of dispute, on many sites across the country, seems likely to go on for months if not years. What nobody is suggesting is that this is somehow the leaseholders’ fault, but almost everyone expects them to pay. At the moment Galliard will not accept responsibility and neither will NHBC.

On 6th February NHBC answered a number of questions posed by LKP as follows:

1) Can you confirm how many claims NHBC has received regarding the type of cladding now deemed not compliant with building regulations following the Grenfell Tragedy?

In terms of claims, we have only had a handful. We are taking the most appropriate actions and providing the information and relevant details on how to make a claim and what information we require to progress claims to help building owners/managers. We also have been in dialogue with Government and other responsible and representative bodies actively assisting with their efforts.

While we have a thorough approach to assessing cladding systems on high rise buildings, we took immediate action following new evidence from the most recent Government fire tests, and advised builders that we will not accept any wall construction that does not meet the simple guidance for limited combustibility or that has not been subjected to a fire test.

2) Can you confirm if NHBC has accepted any claims and how many have either been repudiated or gone into dispute?

To date we have only had a handful of claims notified. Most claims notified to us are still at an initial stage awaiting further information to be provided by the claimants. We have not been notified of any disputes on decisions made so far.

3) Can you confirm if the warranty offered by NHBC includes and excess for every flat when works apply to the common areas? If so what the excess is per claim? We are told the excess may be £2,000 for every flat. Is this correct?

This is incorrect. Any claims of this nature would be made under Section 4 or, in the case of Housing Association policies, Part E. There is no excess or minimum claim value applied.

4) Can you confirm that the first line of the job description for NHBC claims consultants is still as per your standard job specification of 2015 and explain why “repudiation” if felt to be a key part of the claims consultants role?

Determining validity is a key function of any claims handler in any insurance company.

Surely Mr O’Sullivan of Galliard and NHBC can at least agree that, at the end of their dispute, one or the other will accept liability for the cost of the remedial works and the fire marshalls.

If not, will they agree that, instead of trying to pass the costs to the leaseholders, who are definitely not to blame for the situation, they will take a joint action to pursue the government or the cladding supplier or some other third party who they believe is in fact liable.

Will they work together to recover the monies from these parties so that no charge is made to the leaseholders? The leaseholders are clearly not at fault for, what would now seem to be deemed, a defective building.[/su_box]