Donate
You are here: Home / Latest News / The Times reports that families ‘lost £3 billion’ on resale of leasehold retirement flats, while developers and freehold speculators made millions 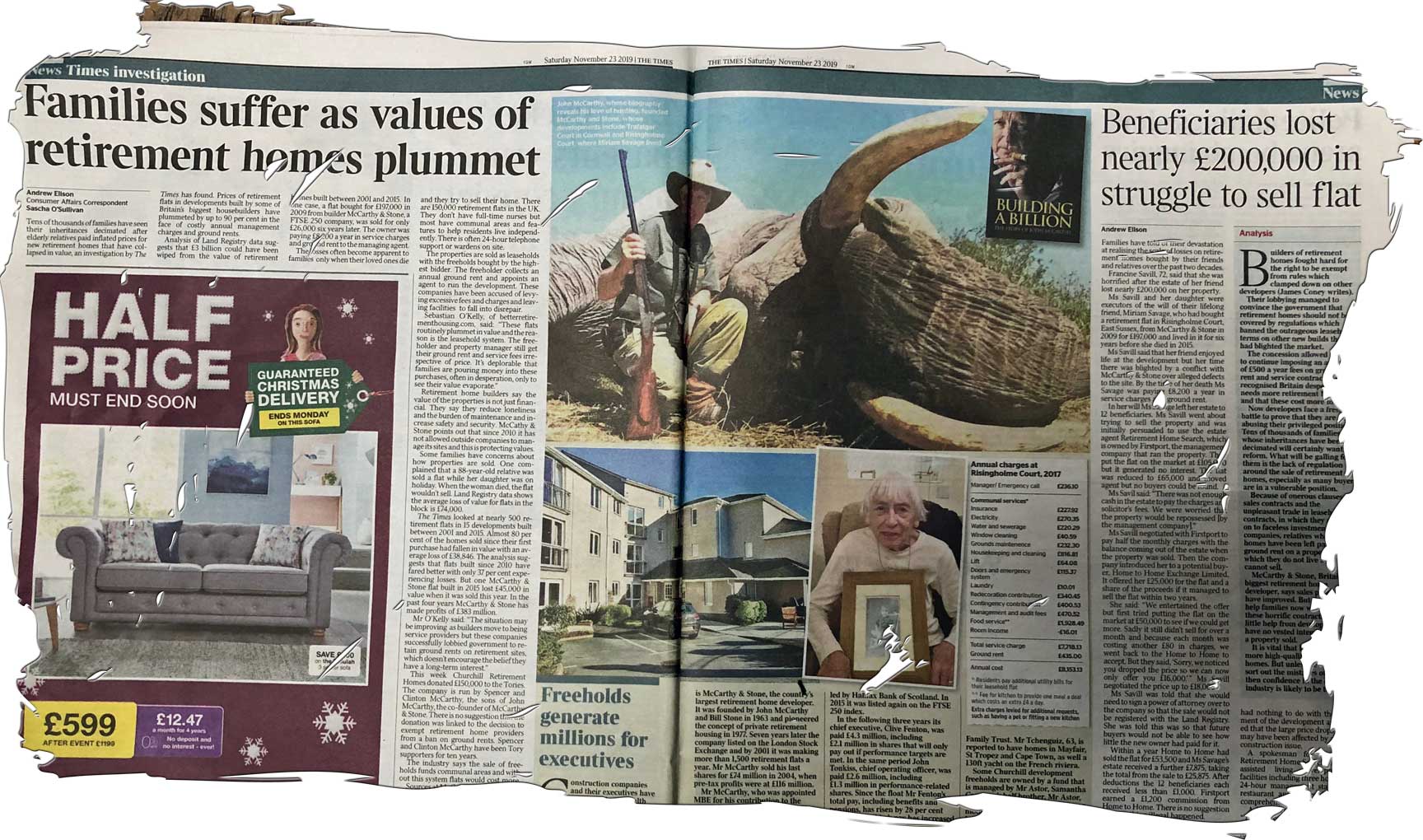 The Times today suggests that families have lost £3 billion on the resale of leasehold retirement flats between 2001 and 2015 in a series of articles that add up to a devastating investigation of the sector.

Some 80 per cent of the properties sold had fallen in value, with an average loss of £38,846, the newspaper claimed.

While pensioners and their families lost out, retirement house builders and ground rent speculators made millions.

In a hard-hitting editorial, the newspaper condemned the exploitation of pensioners as “vulnerable prey” by monetisers in the sector.

If the measure of a civilised society is the way it treats its vulnerable citizens then our investigation into the experiences of elderly people when they purchase retirement homes from certain developers paints a depressing picture of modern Britain. Some buyers of new-build retirement flats have been hit by such exorbitant ground rent and service charges levied by management companies that the apartments are rendered virtually worthless when the homeowner dies.

The Times cited the example of a flat at Risingholme Court, East Sussex, built by McCarthy and Stone, that was bought for £197,000 in 2009 by Miriam Savage and was sold six years later for £25,875 by her beneficiaries.

As BetterRetirementHousing.com has repeated made clear: these catastrophic falls in value are far from unusual.

“These flats routinely plummet in value and the reason is the leasehold system. The freeholder and property manager still get their ground rent and service fees irrespective of price. It’s deplorable that families are pouring money into these purchases, often in desperation, only to see their value evaporate.” 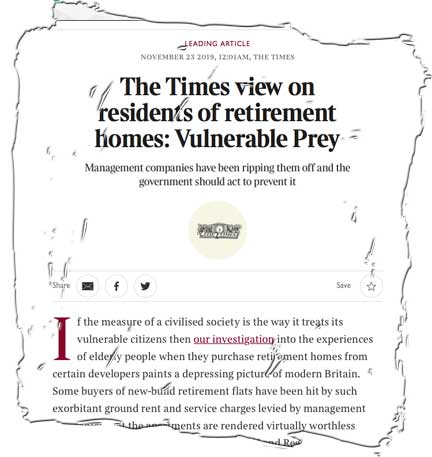 The Times view on residents of retirement homes: Vulnerable Prey

If the measure of a civilised society is the way it treats its vulnerable citizens then our investigation into the experiences of elderly people when they purchase retirement homes from certain developers paints a depressing picture of modern Britain. Some buyers of new-build retirement flats have b

Tens of thousands of families have seen their inheritances decimated after elderly relatives paid inflated prices for new retirement homes that have collapsed in value, an investigation by The Times has found. Prices of retirement flats in developments built by some of Britain’s biggest housebuilder

Construction companies and their executives have generated huge wealth by selling leasehold retirement homes.Several well-known businessmen and their families, including Vincent Tchenguiz and William Waldorf Astor IV – David Cameron’s brother-in-law – also own or control the freeholds to many of the

Families have told of their devastation at realising the scale of losses on retirement homes bought by their friends and relatives over the past two decades. Francine Savill, 72, said that she was horrified after the estate of her friend lost nearly £200,000 on her property.

Builders must keep trust to deliver the homes Britain needs

Developers of retirement homes fought hard for the right to be exempt from rules which clamped down on other builders. Their lobbying managed to convince the government that retirement homes should not be covered by regulations which banned the outrageous leasehold terms on other new builds that had

Retirement housebuilders will only reform when they are forced to do so, Lord Best tells property conference

Cladding victims unimpressed by Robert Jenrick on BBC1’s Question Time
Next Post: A consultation for leaseholders in Wales