Donate
You are here: Home / Latest News / Government announces regulator to protect leaseholders and their £4 billion in service charges 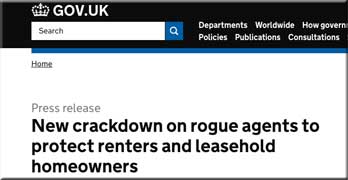 The government has chosen Easter Day – also April Fool’s Day – to announce a regulator for the leasehold sector and other major changes.

Independent regulator and code of practice for letting and managing agents Easier way to help leaseholders challenge unfair fees and service charges Possible prosecution for those who severely breach the code Almost 9 million households in England’s private rented and leasehold sectors will benefit from stronger protections against rogue letting and managing agents thanks to new government proposals announced today (1 April 2018).

A working party is to be established immediately to work out the details.

The announcement today also declares that the right to manage process for leaseholders should be made simpler.

It seeks to empower leaseholders to switch managing agents where they perform poorly or break the terms of their contract. This is curious as leaseholders usually have property management imposed on them by the freeholder and they are not a party to the contract.

The government also proposes that criminal sanctions will be imposed on agents who practise despite not meeting minimum standards.

“With thousands of renters and leaseholders suffering at the hands of rogue agents every day from unexpected costs, deliberately vague bills or poor quality repairs, a new mandatory code of practice is proposed to stop managing and letting agents from flouting the law.

“To further professionalise both sectors, letting and managing agents will be required to obtain a nationally recognised qualification to practice, with at least 1 person in every organisation required to have a higher qualification.

“A new independent regulator responsible for working practices of agents will be given strong powers of enforcement for those who break the rules – and agents who fail to comply will not be permitted to trade. Criminal sanctions could also be brought in for those who severely breach the code.”

“Most property agents take a thorough and professional approach when carrying out their business, but sadly some do not.

“By introducing new standards for the sector, we will clamp down on the small minority of agents who abuse the system so we can better protect tenants and leaseholders who find themselves at the end of a raw deal.”

Other proposals to be brought in under the code include:

Support for leaseholders to switch their managing agents where they perform poorly or break the terms of their contract.

A requirement for all letting and managing agents to undertake continuing professional development and training.

DCLG civil servants inform LKP that a Working Group involving stakeholders across the leasehold and private rented sectors will be created to deliver these commitments, and that the group will be established as soon as possible.

We might carp a little at coupling leasehold property managers and letting agents on the grounds that the government is pushing leasehold towards other forms of tenancy.

This is not unreasonable given the legal status, but our argument is for transforming leasehold tenancies into secure property ownership: creating only commonhold, ultimately. One of the first answers to the problems of leasehold is: stop creating more of it.

But a proper, robust regulator of the leasehold sector would be very welcome.

We only need to look at the mess made by self-regulation.

RICS managed to pull off disciplining Warwick Estates with a £20,000 fine for a health and safety failure that resulted in death. But it really did little more than rubber-stamp a criminal court’s prior decision.

It messed up ruling on Benjamin Mire, and its regulatory regime  had to apologise in October 2016 to 317 struck-off or disciplined chartered surveyors after a barrister revealed failings in its procedures.

Still, this is way better than ARMA, whose regulatory regime is in tatters.

Whoever gets the regulator role, please, let it be absolutely none of the usual leasehold sector professionals.

Leaseholders have had quite enough apologists for the status quo (if not worse) in the Leasehold Advisory Service.

Indeed, if you have made your money out of leaseholders and the leasehold system not working very well, then let’s hope government is not interested in your application.

We need a serious, determined and respected regulator, the leasehold sector being awash with jobsworths and charlatans already.

But haven’t we come a long way? Today shows government is determined to get to grips with this sector and improve it.

And it is hugely welcome to see paragraphs such as this now coming from government (which until LKP came along was being told that the sector was functioning just fine):

“In leasehold, the structure of the system itself is partially to blame. The very nature of the agreement means that leaseholders are typically excluded from decisions on property management.

“A number of protections to address the imbalance of power in leasehold have been introduced over time, but these are often inconsistent, complex and can be abused by those that they were meant to defend against. Rights to challenge service charges, or to take on management directly, can be undone in a tribunal system that can often be daunting, costly and uncertain”

Will Lord Best’s regulator help break the power of freeholders over their leaseholder victims?

National Leasehold Campaign tells Roger Southam to resign from LEASE
Next Post: Sajid Javid tells BBC why his leasehold and lettings regulator is a good idea