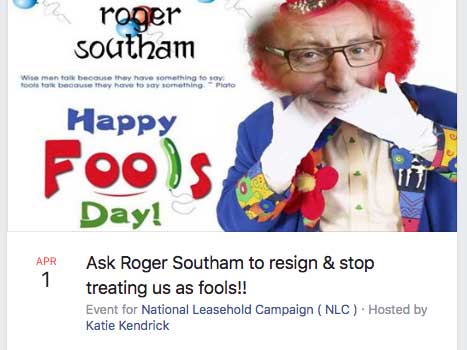 UPDATE: Has Roger Southam resigned from Savills? His LinkedIn profile suggest his employment there discontinued at the end of last month. He is now associated with the Eighty Nine Consultancy, which has no website and may be self-employment.

The call echoes LKP when it declared no confidence in Mr Southam at a meeting of stakeholders in the leasehold sector at the DCLG where he was present in April 2017.

Both Justin Madders MP and Sir Peter Bottomley have expressed their lack of confidence in Mr Southam in the Commons.

Mr Southam in turn complained to the Parliamentary Standards Commissioner about Sir Peter and Jim Fitzpatrick MP and LKP, as secretariat of the All Party Parliamentary Group on leasehold reform – to whose meetings Mr Southam has long been uninvited.

Mr Southam’s complaint prompted a pained reaction from Sir Ed Davey, the third MP patron of LKP, to ask: “Why was I left out?”

Today April Fool emails have been sent to Mr Southam, copied to ministers, MPs, LKP and the chief executive of LEASE urging his resignation.

The following is from Catherine Williams, one of the three founders of the National Leasehold Campaign Facebook group, which has 10,500 members:

“I am a member of the National Leasehold Campaign and have been fighting leasehold abuses for the past twelve months. During that time I have looked for advice on the leasehold issues being experienced by myself and other members and obviously LEASE appears as one of the first organisations available to us.

“At first glance it appeared that LEASE was the most appropriate place to ask for help as it is government backed with funding presumably taken from UK tax payers? I also note that this funding has been recently increased in an attempt to improve support for leaseholders during this very difficult time.

“To compound this issue further it transpires that your wife Roberta Anderson works for Mainstay (yet another property management company) and has responsibility for the AVIVA realm fund that holds over 36,000 freehold portfolios.

[Ms Anderson’s LinkedIn profile has her described as head of acquisitions for both the Mainstay Group Ltd and the Wallace Group & Simarc Property. Missing from the LinkedIn profile is reference to previous employment with Dorchester Ground Rent Management headed by Julius Gottlieb, a ground rent fund that imploded after his criminal conviction in December 2016 for attempting to groom a 14-year-old girl, whom he arranged to meet at Guildford station:

One of the UK’s prominent residential ground rent investors who enjoyed a glittering career heading finance departments of some of the country’s top PLCs has admitted to grooming a teenage girl for sex. Julius Gottlieb resigned as managing director of Dorchester Ground Rent Management after he was arrested when he went to meet the 14-year-old, whom he believed he had been chatting with online.

Miss Williams continues:
“I am astounded that you are allowed to continue as chairman of LEASE with such clear conflicts of interest, unless of course the main remit of that organisation is to advise investors on how to maximise profits from freehold portfolios and leaseholders?

“If that is its remit then please disregard my email – if it’s remit is the exact opposite and LEASE has been created to support aggrieved leaseholders then I suggest that you are not the best person to head the organisation and as a tax payer I wish to object to my money being used in this way.

“In my opinion you cannot possibly represent both leaseholders and freeholders in the current climate of the Leasehold Scandal and request that you step down as Chair of LEASE with immediate effect.”