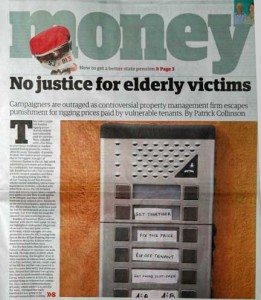 Yesterday the Guardian published a devastating report of the Peverel / Cirrus price-fixing scandal.

It poured scorn on Peverel for systematically cheating residents of retirement leasehold, on the Office of Fair Trading for its scandalous feeble report and being suckered into granting Peverel leniency.

It also rightly derided Peverel’s £100,000 offer of a “goodwill gesture” – which should prompt a gesture of an altogether more vulgar variety in reply.

The article was written by Patrick Collinson, the personal finance editor, who has written about Peverel in the past.

Please comment on the article here in order to prompt a follow-up.

It would be useful if the Guardian reports the compensation proposals put forward by Sir Peter Bottomley, which are supported by Jim Fitzpatrick, Labour MP for Limehouse and Poplar, and Ed Davey, the LibDem Energy Secretary and Cabinet minister.

Campaign against retirement leasehold exploitation has received a number of other examples where Cirrus has carried out works at sites for disputable amounts of money.

Please keep us informed: if your site has been ripped off and is not on the OFT list, we will look into it.

If Peverel has not reported all the sites where the scams operated, then the OFT’s pathetic leniency deal will not apply.

Campaign against retirement leasehold exploitation is also keen to discover what the ARHM has to say about this disgrace. Or the Elderly Accommodation Council, which seems to spend its time doling out awards and linking to a retirement housing estate agency.

The ARHM, funded mainly by Peverel, pontificates about standards, transparency, decency and the rest … now it can comment on an OFT report which, even in its diluted form, is a devastating critique of those managing retirement housing.

It would also be an occasion for Sally (Baroness) Greengross, ARHM president and former head of Age Concern, to address this issue.

She appears to have spent the last 25 years downplaying issues in retirement leasehold and was – according to John McCarthy – the first port of call when McCarthy and Stone disastrously attempted to sue the Daily Telegraph.

She famously said complainers in retirement leasehold were “barrack-room lawyers”, and joked with ARHM members about the indignation caused by the remark.

If nothing else, the OFT report into the corporate plundering of pensioners by Peverel / Cirrus has shown her to be partial and foolish on this subject.

Guardian examines the Peverel / Cirrus price-fixing scandal tomorrow
Next Post: Peverel given clean bill of health by ARMA – just as it admitted Cirrus was cheating pensioners with bogus tenders