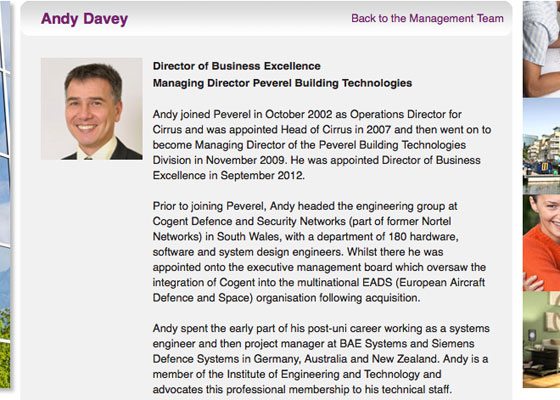 The Guardian is publishing a major report into the Peverel / Cirrus price-fixing scandal in tomorrow’s newspaper.

It is written by Patrick Collinson, the personal finance editor, and will appear on the front cover of the stand-alone Money section.

It is understood that the report gives the background to the sham tendering that Peverel engaged in, and the disgraceful decision by the Office of Fair Trading to do a leniency deal with the company.

The scandal inevitably raises questions over Andy Davey (above), former head of Cirrus, who is now Peverel’s director of business excellence.

Everything about this OFT inquiry is scandalous. It is almost as serious as the cheating undertaken by Peverel.

The OFT was either suckered into accepting a leniency deal with Peverel in December 2009, or complacently went along with the fiction that Peverel had somehow “turned itself in”.

The demonstrable truth is that Peverel owned up to the practices because it had been rumbled.

The Cirrus scam had even been outlined in the Times on December 4 2009.

Then the inquiry only got underway in April 2011 – 16 months after Peverel supposedly turned itself in.

In a final display of confidence-sapping cleverness, when the OFT announced its findings last Friday it declared that the stooge companies involved in the price fixing cartel would be fined £53,410.

As for Owen Installations, it settled up last February and only paid a “settlement” of £1,777, “thereby benefiting from a settlement discount”.

The company is based in Weymouth and is directors are Jeremy David Owens and Joanne Owens. Its registered business address is a residential villa belonging to the firm’s accountants.