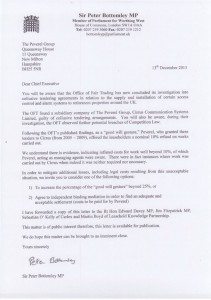 Janet Entwistle, the chief executive of Peverel, was this afternoon sent a letter from Sir Peter Bottomley demanding higher compensation to sites cheated in the Cirrus cartel, or to accept independent binding mediation.

The letter is backed by Ed Davey, Energy Secretary and LibDem MP for Surbiton and Kingston, and Jim Fitzpatrick, MP for Limehouse and Poplar.

The letter is public and has been circulated to all media.

Tomorrow the Guardian is giving extensive coverage to the scandal.