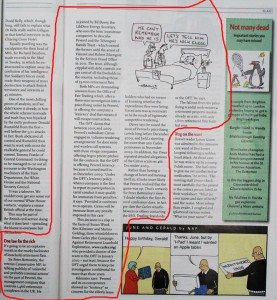 The alleged Peverel / Cirrus price–fixing scandal has been reported at length in this month’s issue of The Oldie. (Click on image)

It repeats Sir Peter Bottomley’s view that Peverel has undertaken “unlawful and probably criminal actions” and he dismisses the Office of Fair Trading’s fiction that Peverel turned itself in.

Campaign against retirement leasehold exploitation can demonstrate that its members were deluging the authorities with evidence of Peverel’s price-fixing before Peverel contacted the OFT.

“I doubt whether the first Peverel confession does, in fact, pre-date the Campaign against retirement leasehold exploitation whistleblowers or others contacting the SFO, Trading Standards or the OFT,” says Sir Peter.

Ken Kilmister, one of the three Campaign against retirement leasehold exploitation whistleblowers who have been the OFT to take action over the price-fixing for more than three years, is quoted saying:

“Peverel and its co-conspirators showed no “leniency” or concern for elderly leaseholders who had no means of knowing whether the expenditure they were being forced into was a/ necessary, and b/ the result of legitimate competitive tendering.”

The OFT has yet to issue its complete findings into this issue.

At the September 2 meeting with the OFT held at LKP / Campaign against retirement leasehold exploitation’s behest, chaired by Ed Davey with Sir Peter Bottomley attending, the OFT said a list of the retirement sites where the fiddled tendering is alleged to have taken place will be made public.

This was repeated in an email to a retirement leasehold activist by an OFT official today.

“If we issue an infringement decision (on which the final decision has not been taken as yet) we plan to provide details of the properties that were the subject of the infringing behaviour – this would be quite straight forward because the properties are clearly identified in the evidence,” said the official

Challenge to £100 leasehold subletting demand reveals nothing at all is owed
Next Post: Prostitutes breach leasehold covenants concerning ‘persons of immoral life’ »