… ‘the system is rotten’ to have allowed Peverel / Cirrus to get off, says Bottomley 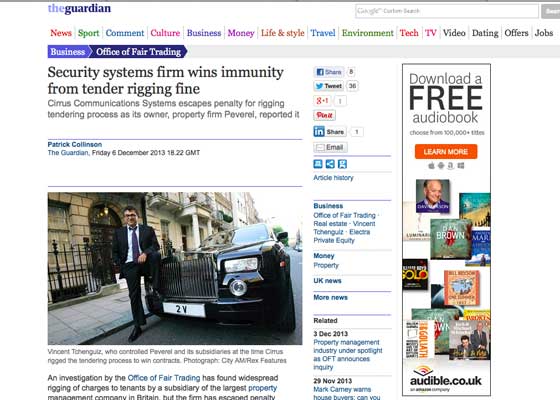 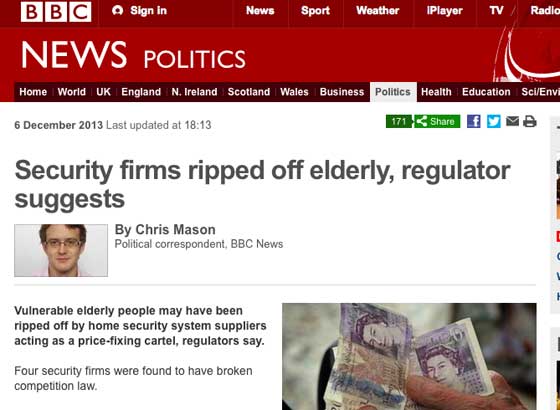 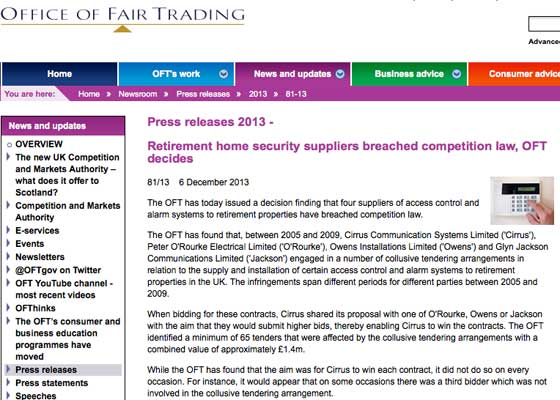 The Peverel / Cirrus price-fixing scandal was finally confirmed by the Office of Fair Trading today, which found that retirement leaseholders had been cheated in tenders of £1.4 million.

A “minimum” of 65 tenders were examined.

Because the OFT accepted the fiction that these scams were “first brought to the OFT’s attention in December 2009” by Peverel, both it and Cirrus benefit from “immunity from financial penalties”.

Campaign against retirement leasehold exploitation had, in fact, reported the issue to the OFT and the Serious Fraud Office and held a meeting in the House of Commons where these scams were discussed.

No one at the OFT seems to have read The Times on December 4 2009, where the Cirrus scam was outlined at some length.

Ed Davey MP, the Energy Secretary, and Sir Peter Bottomley have expressed their disgust that the OFT were suckered into a  leniency deal by Peverel.

“This is a complete scandal,” said Sir Peter Bottomley. “Other investigators passed the problem to the OFT and Cirrus knew they were in trouble.

“It is odd that by far the greatest offender gets off. The systems are rotten if they allow this.”

Peverel’s then chief executive Nigel Bannister was quoted in The Times in November 2009: “People are reading a conspiracy into a problem that isn’t there. We use Cirrus because it is an excellent service.”

So, it can at least be conceded that Peverel’s decision “to help with inquiries” was somewhat tardy.

The OFT statement today says it has imposed £53,410 fines on the other firms involved in the fiddle Owen Installations, based in Dorchester, Peter O’Rourke Electrical, based in York, and Glyn Jackson Communications, based in Leeds.

As for Owen Installations, “Owens has admitted its involvement in the collusive tendering with Cirrus and entered into a settlement agreement with the OFT in February 2013, thereby benefiting from a settlement discount.”

What did that involve?

So the OFT fines are pretty meaningless.

Sebastian O’Kelly, of Campaign against retirement leasehold exploitation, said: “The first task is to get the money returned to the retirement sites that were cheated by Peverel / Cirrus.

“The Office of Fair Trading – and government – needs to understand how appalled retirement residents, and others, are at this feeble and collusive so-called investigation.

“The leniency deal with Peverel is based on fiction and is an utter disgrace.

“The time taken to commence inquiries would not have impressed Sherlock Holmes: Peverel supposedly turned itself in in December 2009, but the investigation began in April 2011. Why?

“I have no doubt that this investigation would have been even more pathetic had not Ed Davey and Sir Peter Bottomley – with the prime minister’s intervention – backed Campaign against retirement leasehold exploitation’s demand to meet the OFT chief executive last September.

“That has resulted in the full investigation into leasehold property management announced earlier this week.

“Although this investigation was not edifying for those who desperately want our public institutions to function properly, the fact remains that the biggest leasehold property manager – and the one with a near monopoly in retirement housing – systematically cheated elderly and vulnerable residents in its care.

“All retirement sites should exercise their right to manage and appoint a property management company of their choosing.”

Oh, and here is a reminder of the directors involved in helping Peverel / Cirrus cheat pensioners :

Owen Installations based in Dorchester is still operating and shown in Duedil as having an estimated turnover for the year ending Feb 2013 of £129.643. Directors Jeremy David Owens and Joanne Owens

Pravda alive and well at LEASE, ARMA and Peverel … who ALL support the OFT inquiry into leasehold fiddling
Next Post: Three MPs tell Entwistle to pay up more over Peverel / Cirrus scandal, or accept binding mediation