The Opposition and some media have been quick to see the government back-tracking on leasehold reform owing to the Queen’s speech today, but LKP thinks this reaction is a little hasty.

It could also be just muddle, there being no decent policy advisor looking at leasehold ever since Sajid Javid’s team was scattered when he was promoted from Communities Secretary to become Home Secretary.

● The Government is taking forward a comprehensive programme of reform to end unfair practices in the leasehold market. This includes working with the Law Commission to make buying a freehold or extending a lease easier, quicker and more cost effective – and to reinvigorate commonhold and Right to Manage.

● The Government will ensure that if a new home can be sold as freehold, then it will be. We will get rid of unnecessary ground rents on new leases and give new rights to homeowners to challenge unfair charges. The Government will also close legal loopholes to prevent unfair evictions and make it faster and cheaper to sell a leasehold home.

● For those in the social rented sector, we will bring forward a Social Housing White Paper which will set out further measures to empower tenants and support the continued supply of social homes. This will include measures to provide greater redress, better regulation and improve the quality of social housing.

LKP is distinctly queasy about the term “necessary ground rents” as we have argued repeatedly that no ground rents are necessary: they are a speculative income stream in the homes of ordinary families, often owned by murky offshore investors, and are for no service whatsoever.

We were delighted when Sajid Javid committed to zero ground rents in future builds and – after a few months of wobble – this was re-confirmed by his successor James Brokenshire.

The latest Communities Secretary Robert Jenrick immediately confirmed on Twitter that the policy will be ZERO ground rents in future: 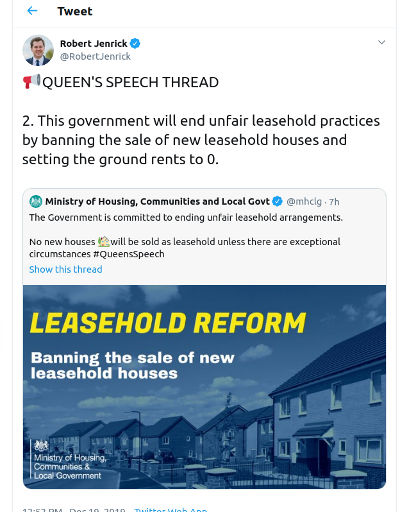 “This looks like the Conservatives backtracking in the face of opposition from vested interests in the property market.

“The truth is a Conservative government can’t help leaseholders because they won’t stand up to those who are profiting out of the leasehold scandal.”

LKP is not persuaded of this. It would be an insanity for the Conservatives now, with their huge majority, to fail to get to grips with leasehold – a hugely expanded form of tenure, and therefore problem, in recent years.

The Independent was also critical. Well, at the pace things are going, we should not have long to find out …

Boris Johnson’s government has watered down commitments to end the sale of new homes as leaseholds and combat exploitative arrangements for homeowners. It comes as the new majority Conservative government unveiled dozens of bills in the Queen’s Speech on Wednesday, as Boris Johnson set out his domestic agenda beyond Brexit for the coming year.

Here is the government press release

“The Queen’s Speech has also set out further detail for new legislation to bring an end to the unscrupulous practice of unnecessary leaseholds – introducing new laws to ban new houses being sold on a leasehold basis and reducing ground rents for new leases to zero.”

“We are moving forward with legislation to set ground rents to zero, abolish leasehold houses and prioritise the safety of residents with the biggest change to building safety laws for 40 years.”

An open letter to Robert Jenrick: the costs of delayed leasehold reform

Does Dominic Cumming’s gung-ho planning idea put a hole in Law Commission’s enfranchisement reforms by boosting freehold values?
Next Post: Our Father, who art in … Parliament