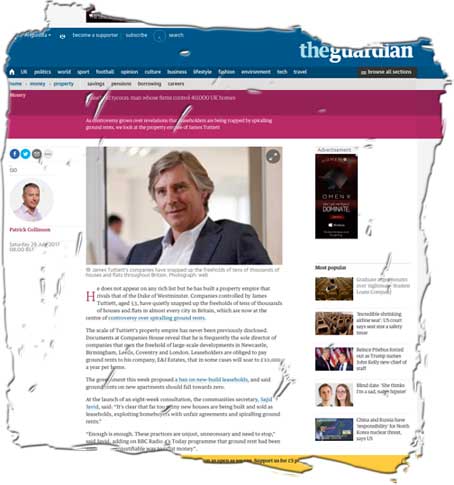 The Guardian today reports on the web of companies run by James Tuttiett, 53, a Winchester-based ground rent fund manager and the boss of E&J Capital Partners.

Many of the freeholds of leasehold houses in the North West bought by first-time buyers assisted by the taxpayer-funded Help To Buy scheme belong to the ground rent funds run by James Tuttiett.

The article is written by personal finance editor Patrick Collinson, whose coverage in October last year made leasehold houses a national issue. He spoke at the All Party Parliamentary Group meeting in December 2016.

This week the government announced that it would be banning leasehold houses and that ground rents on new-build properties should fall “as low as zero”.

“Enough is enough. These practices are unjust, unnecessary and need to stop,” said Sajid Javid, the Communities Secretary, on BBC Radio 4’s Today programme that ground rent had been used “as an unjustifiable way to print money”.

He does not appear on any rich list but he has built a property empire that rivals that of the Duke of Westminster. Companies controlled by James Tuttiett, aged 53, have quietly snapped up the freeholds of tens of thousands of houses and flats in almost every city in Britain, which are now at the centre of controversy over spiralling ground rents.

The Guardian has found 85 freehold companies controlled by Tuttiett, including the freeholds of commercial buildings such as garages and health clubs.

“The financing of Tuttiett’s property empire is helped by low-interest loans totalling £336m made by an insurance company, Rothesay Life, spun out of Goldman Sachs, in which the US investment bank remains the largest shareholder.

“Among the Rothesay Life loans made to E&J is one at £128m with a stated interest rate of just 0.95% a year, although it is understood the real rate paid is likely to be higher.

“The existence of the Rothesay Life loans opens a back door into Tuttiett’s interests, as Companies House lists all the properties over which Rothesay has a charge.”

Rothesay Life, which invests pension funds for considerable fees, also has a debenture on the entire ground rent income of the heavily indebted Tchenguiz’s interests.

Consent fees, insurance commissions, assignments etc go to the Tchenguiz interests, but the ground rent goes to Rothesay Life, where these assets have been rated triple A.

James Tuttiett runs his fund from offices beside Winchester Cathedral.

Sebastian O’Kelly, of LKP, is quoted in the newspaper saying:

“E&J conducts its affairs with the typical arrogance of leasehold landlordism. It makes a nuisance of itself – like other freeholders – demanding fees for subletting and consents for patios and conservatories.

“It believes, with justification sadly, that this high-handedness is backed by law and that the tenantry – that is, the leaseholders – have no choice but to pay up.

“There is almost nothing in its business model that would be unfamiliar to an 18th-century landed gentleman. This game obviously provides Mr Tuttiett with a very nice life.

“But it is not wealth creation or imaginative business. It is parasitism that our legislators have shamefully failed to stamp out.”

Patrick Collinson, of The Guardian, … on leasehold

Ground rent baron James Tuttiett gives £8,500 to the Tories (which is a bit stingy, considering …)