But will its reforms help 100,000 trapped in unsellable homes? 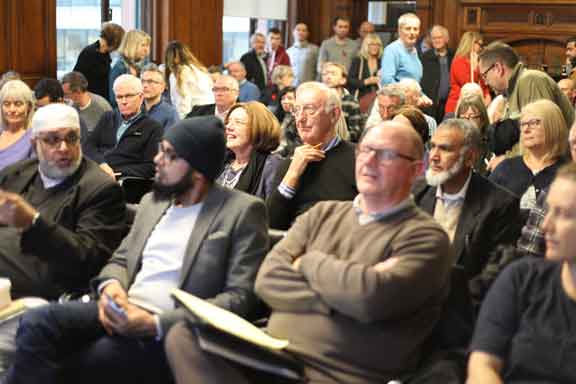 The Law Commissioner Professor Nicholas Hopkins and his five-strong team came to Manchester yesterday to address 120 leaseholders organised by LKP and the National Leasehold Campaign group.

He was joined by Justin Madders, Labour MP for Ellesmere Port and Neston, an official from the DHCLG and professional negligence solicitor Robert Godfrey, of Simpson Millar.

Mr Madders made a powerful speech denouncing the “industrial scale racket” of leasehold house sales and doubling ground rents across the country.

Last week he proposed a Private Members Bill whereby residential freeholds could be purchased for 10 times annual ground rent. Unfortunately, the Bill was not heard.

This proposal is rejected in the Law Commission’s 500-page consultation as likely to violate the human rights of the private equity speculators who are hitching a ride on ordinary families’ homes by taking a punt on the freehold. And that includes the human rights of anonymous beneficial owners who hold the asset in company structures offshore.

Professor Hopkins urges all leaseholders to respond to the consultation “even if you only respond to one question”.

A key question from members of the audience with doubling ground rent or ground rents above 0.1 per cent of the property’s value, was:

Should I wait for the Law Commission reforms to be enacted, or extend my lease or enfranchise now?

To which Professor Hopkins had to reply: “I don’t know.”

Ultimately, the decision whether to implement the report will be the government’s.

In its report, the Law Commission rightly references the “irreconcilable” different views of leaseholders and freeholders.

“Decisions about which side to favour, and how to strike a balance between the competing interests, depend to a large extent on political judgement.”

The Law Commission report is a solid piece of working looking at ways to make enfranchisement and lease extension simpler, cheaper and easier.

It introduces proposals to introduce a simplified procedure to enfranchise that should be the same for flats and houses.

It ends some of the complexities, such as having to own a property two years before being able to buy its freehold.

It has some new ideas, such as leaseholders should have a “right to participate” in sites that have already enfranchised.

It suggests allowing a single maisonette – where there are just two – to enfranchise, which will strengthen the hand of the non-freeholder in such a set-up.

It suggests collective freehold acquisition of an entire estate of multiple buildings, blocks and houses, which could be a means out of “fleecehold” management structures.

The report references the tactical gaming of the leasehold enfranchisement process.

But it sticks with 25% commercial property in a block to be an impediment to enfranchisement. Why?

And it makes breezy and unreferenced remarks about a functioning leasehold sector:

“… we would emphasise that, while there have been abusive practices in leasehold, there are other landlords who operate fairly and transparently.”

It would be interesting to know what makes the Law Commission make this observation.

LKP would argue that it is not a question of good or bad freehold owners, but whether they should have the power and income streams (for so little, including initial monetary outlay ) that they do have.

The Law Commission says that “leasehold does not provide outright ownership”. So, hopefully, this will encourage government and organisations such as the Advertising Standards Authority to address how these contracts are sold as “home ownership” and, in many cases, with taxpayer subsidy through Help To Buy.

He told the meeting that each individual claim would be different, and cautioned against over optimism that all have a case.

LKP is aware of 17 cases where conveyancing solicitors or their insurers have reached settlement.