Donate
You are here: Home / News / LEASE / Leasehold Advisory Service: ‘Lawyers here won’t even speak to me, because I cannot afford their fees’

In the last ten minutes the Leasehold Advisory Service annual conference burst into life this afternoon when a furious delegate grabbed the microphone and said the quango was failing to represent the interests of ordinary leaseholders.

“I see around me here landlords and managing agents and lots of lawyers who won’t even speak to me because I cannot afford their fees,” Julian Shersby, 49, told the conference.

“The Leasehold Advisory Service is failing to fulfill its parliamentary mandate by excluding leaseholders. It should be even-handed and defending their interests. Instead, it has organized an event purely to the benefit of landlords.

Shersby, a leaseholder who for 15 years has lived in a converted stately pile  outside Dorking in Surrey, introduced a rare discordant note in the proceedings, which mainly concerned legal precedent and how to fight leaseholders in the courts.

“No ordinary leaseholders are going to attend an event where it costs £350 for a day, including lunch at a Mayfair hotel,” he said.

Speaking immediately afterwards, Sebastian O’Kelly, of the Leasehold Knowledge Partnership, expressed his sympathy for Shersby, who last year had to pick up a £44,000 legal bill after fighting his landlord in LVTs.

“The Leasehold Advisory Service conference in no way reflects the anger that exist among leaseholders, with the £1 million LVT settlement at St George Wharf, the £400,000 LVT victory at Charter Quay or the ongoing controversies at Chelsea Bridge Wharf.

“These are major settlements at some of the most prominent developments in the capital. The voices of leaseholders have not been heard.” 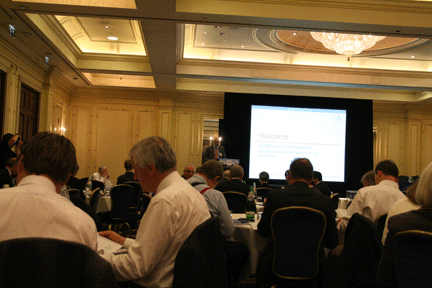 The £350 Leasehold Advisory Service annual conference in Mayfair – lunch included – drew plenty of landlords, lawyers and civil servants, but not many actual leaseholders. Why was that?

The only concession to  leaseholders was a small side session where Bob Smytherman, chairman of the Federation of Private Residents Associations and a member of the LKP board, offered insights from “the ordinary leaseholder’s point of view”.

The bulk of the conference was attended by landlords, enfranchisement lawyers, managing agents and public sector employees.

The most interesting contribution came from Professor James Driscoll, of the Residential Property Tribunal, who concluded that it was overdue to revisit leasehold law and regulation.

The event was attended by  200 people.

Anthony Essien, Leasehold Advisory Service chief executive, said he sympathized with ordinary leaseholders, but that they did not come in any number to the open events Lease organizes around the country.

LKP and Leasehold Advisory Service will hold talks to organize conferences where ordinary leaseholders can attend.

RICS: we serve the public, not ourselves (these days)

Delegates to the Leasehold Advisory Service annual conference were welcomed by an extended address by Alan Collett, president elect of the Royal Institution of Chartered Surveyors who laid heavy emphasis on the need for transparency, honesty and fair dealing.

RICS was not a trade body but had a public duty element, he said, and one had to wonder why he felt he had to emphasize integrity quite so repeatedly.

As a result, one was irresistibly reminded of two years ago when the few leaseholders at the annual Lease conference got rather more transparency than they bargained for from one RICS delegate.

Gary Murphy, the vice-chair of the RICS auctioneering group, cheerfully pointed out that landlords could help themselves to up to 50 per cent of the total insurance premiums in commission, and that leaseholders have no legal right to know the level of payments.

The potential to profit from insurance is enormous.

Of course, disclosure of commissions is required under the RICS “Service Charge and Residential Management Code”.

“Insurance commissions and all other sources of income to the managing agent arising out of the management should be declared to the client and to tenants.”

The only problem is that it isn’t managing agents who receive these commissions, it is the landlord!

Peverel was taking no chances with ex-civil servant and new ARMA chief executive Michelle Banks. Throughout the day she was sat firmly between Claire Banwell Spencer, head of legal, and Gerry Fox, of Peverel Porperty Management.

And here is the Leasehold Advisory Service’s version of the day: http://www.lease-advice.org/news/story/?item=116

Anyone who thought that last week’s annual conference of Leasehold Advisory Service, a quango paid for out of taxpayers’ money, would be a gathering of ordinary leaseholders, swapping ideas and experiences of managing their apartment blocks, would have been sadly deluded.

It was, in fact, a very expensive trade show filled with representatives from RICS, ARMA, large-scale managing agents, landlords, solicitors and barristers who have twigged that payola is to be had in this unglamorous backwater of the law.

The event took place at the Millennium Hotel in Grovesnor Square on May 15 and cost £310 a head, so with 200 attendees that was a handsome £62,000 (although there were discounts for group bookings, and some were admitted at no charge).

Perhaps it was reasonable enough for an ordinary leaseholder to listen to Alan Collett, RICS president elect, talk up his trade body and hear him emphasise again and again the need for high ethical standards. The result of this barrage was the irrepressible thought that high ethical standards are perhaps not in over-abundant supply in the leasehold property world.

Similarly, leaseholders would have enjoyed listening to Emma Bulmer, a civil servant of the Department of Energy and Climate Change, outline the Green Deal which is supposed to be introduced in the autumn. It is a ruinous example of government eco-micro-management that will make the handouts for solar panels and wind turbines seem sensible.

Andy Belton, of Notting Hill Housing, gave an overview of his esteemable organisation, and Bob Smytherman, of the Federation of Private Residents’ Associations, gave “an ordinary leaseholder’s perspective”.

What was lacking was any hint that the world of leasehold is in angry ferment: that many of the prime London riverside developments are seething over stealth charges, fiddled inter-company contracts, loaded commissions etc and that millions have had to be paid out.

The London Assembly was concerned enough to bring out its report Highly Charged in March; the CentreForum think tank brings out its leasehold report later this month; the House of Lords, prompted by LKP, debated the issue in April; in Nottingham leaseholders have won two payouts topping £700,000; and LVT actions are stacking up as those who bought flats during the boom fight their landlords and managing agents over service charges.

For the most part, the Leasehold Advisory Service conference was a lawyers’ knees-up, with presentations from Anthony Radevsky, of Falcon Chambers, who has appeared for a landlord at the House of Lords for a ruling on the meaning of the word “house”, and from the youthful Philip Rainey, QC, of Tanfield Chambers, whose fees at LVT are reputedly £5,000 a day.

James Driscoll, a solicitor, veteran LVT chairman and professor of law at Essex, opined that it was probably time to revisit leasehold law, although he was not that impressed by the London Assembly’s report.

He believed commonhold had not taken off in the market, although he accepted that there is some evidence of consumers preferring it if they are familiar with other jurisdictions.

Right at the end, a real moment of pathos was introduced when Julian Shersby, 49, a leaseholder who had fought and lost at LVT made an emotional intervention, which is reported below.

Shersby had gone to LVTs – the supposedly simplified, easily accessible leaseholder tribunals – and had his life turned upside down as a result.

After picking up his landlord’s legal bill, he was down £44,000 – all for attempting to sort out what should have been minor squabbles about the house where he lived.

Unfortunately, Shersby is far from alone. Leaseholders may well go into LVTs armed with little more than a reasonable argument and a touching faith in British justice. Indeed, they have taken LVTs at face value as the low-cost, accessible tribunals that they were supposed to be.

But if they come off worse, there are the legal bills of the landlord to pay. And the Radevskys and Raineys of this world don’t come cheap.

Wibble, Wobble: why the Leasehold Advisory Service needs to be reformed

Leasehold Advisory Service has ‘been under review’ for 10 years. Here are the findings …