Donate
You are here: Home / Latest News / LEASE under pressure to raise cash through paid-for services 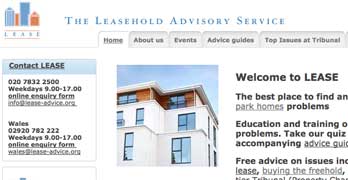 Austerity has arrived at the Leasehold Advisory Service, which is under pressure from government to raise more money from commercial practitioners in the leasehold sector – in order to pay for free frontline services to leaseholders.

Trade bodies and other organisations will be able to subscribe to LEASE for information, and even individuals may be able to pay for a fast track service.

With average telephone waiting times of 28 minutes, and a backlog of written advice requests, this may be a consideration for anyone needing advice on leasehold law in a hurry.

These issues were discussed at the Leasehold Advisory Service’s meeting of stakeholders on December 16.

But LEASE says the primary function of the quango is to provide advice to ordinary leasehold homeowners, or tenants as they are more correctly known in law – of which more further down.

LKP  has long expressed concerns about the commercial activities of LEASE and its efforts to raise revenues through the sector. That is, from freeholders and managing agents and other advisers of one sort or another whose interests may be in direct conflict with leaseholders.

Furthermore, if the service increases its commercial advice offerings the question has to be asked whether it should be funded by taxpayers at all?

After all, plenty of other organisations provide advice of some sort, whether Citizens Advice, LKP and similar, or trade bodies such as ALEP (Association of Enfranchisement Practitioners).

A further concern is whether the paid advice to commercial concerns is more professional than that provided for free to leaseholders.

To address that issue, the speakers at the LEASE annual conference in February will be the same for the paid-for, day-time conference, and the free evening event for leaseholders.

A curious finding was that in a random test of LEASE’s phone service the chairman Roger Southam answered 25 calls, of which 30% concerned leaseholders who own the freehold. In short, they had issues among themselves.

Professionals only accounted for about 5-10%.

It was strongly argued that though leaseholders may fall out among themselves and render a block dysfunctional, this does not mean that unempowered leaseholders being told what to do by a minority shareholder freeholder was a better system.

In the rest of the world, where residential leasehold does not exist, residents just have to get on with it, and there will be times when a block is harmonious and efficient and times when it isn’t.

The Leasehold Advisory Service also shared its frustrations. It has lost five advisers to the private sector in the 12 months. It is difficult to find staff and keep them, and salaries elsewhere are better.

There have been 15,000 phone inquiries, and 90% of written inquiries have been dealt with, although there is a backlog of 900 inquiries.

There have been 607,323 booklets of free advice have been downloaded between April and November 2015, an increase of 19% over 2014 figures, and 57 face-to-face outreach events in the same period amounting to 1,300 people in total, which includes park home dwellers as well as leaseholders.

The meeting considered the issue of pre-purchase education, for which LEASE has provided a new leaflet. It was argued in the meeting that great emphasis be made that leaseholders are not home owners but tenants in law.

This was a strongly argued issue, with the meeting split.

It was pointed out that the Flood Re insurance proposals, which aid freehold home owners obtain insurance in areas prone to flooding, leaseholders are excluded.

“Just saying that I have a tenancy agreement that has rights and obligations is the starting point to understand most things,” the meeting was told. “For example, why can’t I put a satellite dish on my wall? The answer is because it is not your wall.”

The National Association of Estate Agents was said to be reluctant to address the issue. Others predicted consumer rights legal actions against estate agencies over these issues in the New Year.

There followed a lengthy discussion about right to manage facilitators and the need for a section 20 consultation if the contract for a managing agent is longer than a year.

Another point briefly discussed in the meeting was the increase in fees for the property tribunal coming in next year.

These will be discussed later in a separate article.

LEASE Stakeholder ForumI note your piece about the stakeholder forum. These are held six monthly to inform and receive feedback on the plans and activities of the Leasehold Advisory Service. Since becoming Chairman of LEASE I have been open on initiatives and we are making great strides to move the service forward. Ensuring our service delivery is as effective as possible is our goal.LEASE is adapting it’s team to reduce the waiting time on the phones and this will be constantly reviewed and monitored to ensure the waiting times are reduced and any actions necessary implemented. There will be no differential in service for leaseholders and professional companies. It will be the same advisers handling matters. The difference is that professionals will pay for a service that is free to leaseholders, we are trying to reduce waiting times for all including the leaseholder service.