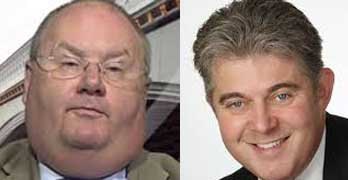 Both Eric Pickles and Housing Minister Brandon Lewis gave a final “vote for us” message to leaseholders earlier this week with a resume of their achievements.

In truth, they add up to very little and the only real reason not to vote against the government is because of almost no sign of life on leasehold issues from the opposition.

(That said, Emma Reynolds, the Labour Shadow Housing minister, did ask a useful question about forfeiture this week. More here)

Tory command thinks that there are legs in extending the right to buy that was so popular in the different universe of the Thatcher era. But too many new council leaseholders are getting wiped out once the council bills them for a major works scheme.

So, as well as a massively subsidised house, council leaseholders need a subsidy to protect them from huge repair bills (which may not be the most rigorously negotiated, to put it at its politest).

Other taxpayers might well conclude that it would be cheaper all round just to give away a few houses through, say, the National Lottery.

Brandon Lewis, on the other hand, addresses the Competition and Markets report, and is particularly enthusiastic about any aspect of it that tends to self-regulation, commercial solutions and the status quo.

But there is at an acknowledgement that leaseholders are ill-served by – in fact, play no part of – the market when it comes to property management: all they do is pay, powerlessly. Unless they are an RTM or residents’ management company.

Most important is the support for a commercial approach to a mediation service.

“My Department has asked LEASE to consider whether early intervention mediation could be offered as part of an expanded commercial model.

“It would not be possible for this service to be offered free of charge.

“We will be meeting with MoJ officials and LEASE shortly to see how we can incentivise the take up of mediation in property disputes, drawing on other examples across the tribunal system.

“MOJ and DCLG will provide an update on progress in 12 months.”

It is very important that those representing the leaseholder interest are a part of this consultation.

The thought that this notoriously dodgy sector should be put in charge of some sort of judicial process is alarming, to say the least.

For commercial mediation to have any value – and we start from a point of scepticism – it would have to come from complete outsiders.

If LEASE is wise it will urge leaseholder engagement with this process from the start in order to avoid the corrosive relationships with the commercial sector which have proved so damaging in the past.

Lewis also refers to mediation by the property tribunal, which is the only mediation to date that LKP has any confidence in.

Encouragement of pre-hearing mediation has been successful, we understand, in the South East region, reducing the number of cases that go to full hearing.

Reducing the number of harakiri leaseholder litigants who get so easily turned over in the property tribunal by landlord’s lawyers is undoubtedly a good thing.

Another CMA recommendation that Lewis highlights is to improve the conveyancing process for leasehold properties with the Law Society.

LEASE is to examine this and, again, it would not be a bad idea to involve some leaseholder bodies – LKP, FPRA – to gain input from those who routinely encounter leasehold problems.

The CMA’s interesting recommendation that property management firms have to re-tender for management contracts, was rejected by Lewis.

LKP was always rather dubious over this point: leaseholders in a freeholder-appointed management set-up are not part of “the market” at all: they simply pay for something they have no control of.

“The CMA is concerned that leaseholders may have limited influence or effective control over the quality, price or service of a property management company appointed by the landlord.

“However, we consider that there are strong policy reasons for not introducing this particular recommendation as drafted. We believe that raising awareness of the existing rights and protections leaseholders have, including access to redress, is the short-term priority.

“In the spirit of the CMA’s findings, we will make a commitment to set up a cross sector working group to understand the evidence that has driven this particular recommendation and consider both legislative and non-legislative options to increase competition without adding disproportionate burdens and costs.

“The group will be made up of professionals from across the sector as well as organisations representing the interests of leaseholders.

“We commit to report back to the Competition and Markets Authority (CMA) on progress within 12 months.”

As no party appears to have strong views on leasehold, these initiatives are likely to progress through government whatever party comes out top in May.

LKP and LEASE thank DCLG civil servant for helping leaseholders
Next Post: Too expensive to give figures on leasehold forfeiture, says Ministry of Justice