It is not often we produce good news on the ground rent front, but here is an example.

A leaseholder with the Hyde Group housing association was appalled to receive a ground rent demand of £600, and contacted LKP.

She had been paying £50, but she had extended the lease through the statutory process in 2015, which means a 90-year extension at a pepper-corn rent.

Unaccountably, the Hyde Group then demanded £600 in ground rent.

Martin Boyd, of LKP, suggested that the leaseholder send a copy of the page to the Hyde Group which refers to a peppercorn and ask why it believes £600 ground rent is due. 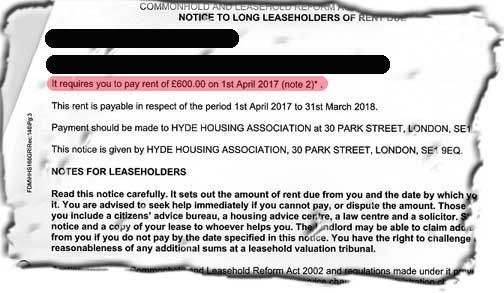 “It looks like you were following the process of a formal lease extension so it should be set to a peppercorn,” wrote Mr Boyd.

“If as part of the deal your solicitor agreed to an informal extension (i.e where the parties set what ever terms they can agree on) your solicitor should have made the matter very clear.”

Eight days later, the leaseholder was back in touch: “I did as you said below and emailed them with the ‘peppercorn rent’ page of my new lease and they got back to me saying that they had made a ‘mistake’ with the charge, and it should have been £50 not £600.

“Thanks again and keep up the really great work that you are doing for us.”

Leasehold houses expose ‘gulf between the letter and the spirit of the law’, say ministers
Next Post: Sajid Javid pledges Help To Buy clampdown on ‘feudal’ leasehold terms