Donate
You are here: Home / Latest News / Barclays turns down mortgage on flat where ground rent doubles every 25 years

The fallout of the ground rent scandal is blighting homes that don’t even have particularly onerous ground rents.

This is causing distortion in the housing market and misery for homeowners who did not believe that the ground rents to their properties would be classed onerous.

LKP has been contacted by a young flat owner whose £265,000 property in Brentwood, in Essex, has £300pa ground rent that doubles every 25 years.

The ground rent – which is for no service whatsoever – is more than the Nationwide’s 0.1 per cent bar on mortgages. So, it would not issue a mortgage.

But in this case the loan for a would-be purchaser was refused by Barclays.

Barclays says that the property is

“not considered acceptable for a mortgage purposes as saleability in the future will become adversely affected over time due to the doubling of the ground rent”.

We are aware of many transactions that have fallen through on leasehold properties where the ground rent terms are not that onerous.

For example, HSBC turned down a mortgage on a flat in Windsor where the ground rent was also £150pa which increased by £150pa every 33 years.

That is annoying and unnecessary, but it is not a ground rent that should affect the leasehold flat’s value.

Many more homeowners are caught up in this ground rent scandal than simply the purchasers of properties from game-playing plc housebuilders such as Taylor Wimpey and Countryside Properties plc. 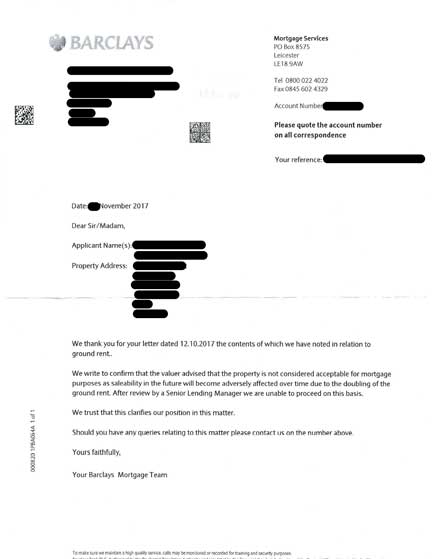