Donate
You are here: Home / Latest News / BBC R4 You and Yours now turns to Countryside’s doubling ground rents 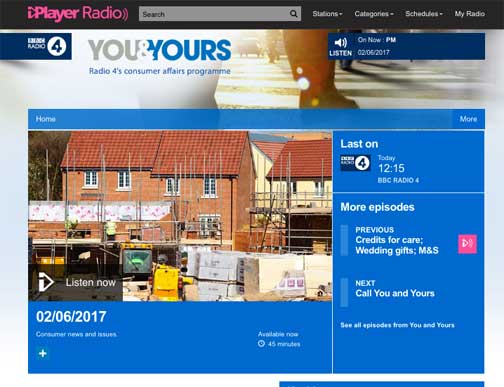 Note: Please comment on this item extensively, as time constraints mean we cannot write up the content of this important item.

Case study Baz Jafar spoke eloquently at how this impacts on his life.

The episode can be heard here: http://www.bbc.co.uk/programmes/b08rp399

… LKP agrees, and so does distinguished mortgage sector spokesman

After the election, the heat is back on Countryside Properties plc, which has been selling off houses and flats with doubling ground rents.

CEO Ian Sutcliffe is also in dialogue with Sir Peter Bottomley … but not the All Party Parliamentary Group on leasehold reform or the Leasehold Knowledge Partnership.

On June 2 2017 Mr Jafar was interviewed by Melanie Abbott on the BBC R4 You and Yours programme after Nationwide, and other banks, ceased lending on properties with onerous ground rent terms.

Mr Jafar told BBC listeners that he had been seduced by a “shiny website” of Countryside Properties plc and “very nice” sales staff who described the leasehold property as “virtually freehold”.

They were “pushy” to have him use their recommended solicitors and brokers, and he was incentivised to go along with it all with legal fees and stamp duty paid for.

“The solicitors that I used were the ones recommended by the housebuilders and they could and should have done a better job explaining clauses in the lease that would impact on me in a negative way.”

Ray Boulger, mortgage sector commentator at Charcol, said: “Without a doubt [the decision not to issue mortgages on homes with high ground rents] has taken money off the value of these properties. The only question is how much it has taken off.

“It is certainly a worry. Baz is absolutely right to be worried.”

Sebastian O’Kelly, of LKP, said: “We have been getting reports of Nationwide, Barclays and HSBC turning down mortgages on these properties before this announcement by Nationwide, and I am sure that other lenders are being similarly advised by their local people on the spot.”

“They should sort it out. There should not be a question of taxpayers sorting this out.”

But Mr Boulger said that the taxpayer will lose out, as Help To Buy accounts for 40% of new build sales.

“If sale proceeds are less than the price paid the government will lose money.

“I absolutely do think that buyers will be entitled to legal redress. Particularly die to the fact that they were incentivised by developers to use the nominated broker and conveyancer. That I think is a key factor.

“There is an obvious conflict of interest between the developer and the broker who owe a duty of care.

“The government should in my view tell the developers that unless they compensate the people caught up in this they will not be able to use the Help to Buy.”