Flats built by developer Countryside Properties at The Mount, Mill Hill, in north London, are being sold with doubling ground rents.

These kick in every 15 years and double on five occasions, meaning that the ground rents will reach £9,600 a year.

And because the developer has sold on the freehold to investors it cannot change the lease terms for the flats still being sold.

These ground rents are unacceptable to the Nationwide building society, which ruled last week that it will not lend on them.

“The ground rent must be reasonable at all times during the lease term, with unreasonable multipliers such as doubling every five, ten or fifteen years not allowed,” said Nationwide.

Even before this announcement,Countryside Properties chief executive Ian Sutcliffe told customers that ground rents in future would be based on RPI “given the recent media commentary on this topic”.

But Mr Sutcliffe said he did not believe doubling ground rent terms were “onerous”.

“At our Mill Hill site [The Mount], and at a number of other Countryside Properties sites, we have sold apartments with a ground rent that doubles every 15 years,” he informed a customer.

“We, at Countryside, do not consider these ground rent terms to be unreasonable, given the low starting point and that it doubles only for the first five times.

“But, given the recent media commentary on this topic, we have made a policy decision to offer future ground rents with an increase based on the retail price index (RPI) instead.”

Mr Sutcliffe’s response was to a buyer who had reserved a flat at The Mount, Mill Hill, and was now trapped in doubling ground rent terms because Countryside Properties had sold the freehold.

The buyer only became of the ground rent terms “three months after reserving the apartment when we received the contracts to sign”.

The buyer said: “At the time, we contacted all London Countryside Properties developments and they all confirmed that this was their policy, so rather naively, we believed this to be standard practice, and exchanged contracts in November 2016.”

The Leasehold Knowledge Partnership had only just begun to get media interest in the scandal at this point.

The Guardian’s personal finance editor Patrick Collinson began a series of articles, which continue, from October 29.

Later that month LKP held the first All Party Party Parliamentary Group on leasehold reform meeting on the subject, with another in December and a full Commons debate on December 20.

The buyer continued: “It was only in February 2017 that the negative press coverage came to my attention.

“Based on the coverage, we raised our concerns with our solicitor (for your reference, they were recommended by Countryside Properties and were one of the few solicitors we could use in order to receive the monetary incentive you offer) who confirmed ‘it was a standard rent review provision across all Countryside Properties developments, and so it was acceptable’.”

“No less than two weeks later, purely by chance, I discovered that one of the developments I rang previously were now reviewing their ground rent in line with RPI and no longer doubling.”

The buyer rang another five Countryside sites in London and contacted the company through Facebook. All confirmed that ground rents no longer doubled.

“It appears that Countryside have changed their ground rent review policy.

“We assumed that this would be applied across the board but, after a three-week wait for a reply from your legal team, we were informed that our lease would not be amended before completion because Countryside ‘have already contractually committed to the existing rent review to the new reversioner’.

“This has now left us is a difficult situation. From our point of view, it looks like Countryside Properties have made quite a dramatic policy change (whether this is based on the Taylor Wimpey scandal or not is obviously debatable).

“However, due to the land being sold we are not going to benefit from this policy change. It now feels like we are stuck with an ‘onerous’ term which, could ultimately result in us struggling to sell the property, because Countryside Properties are protecting their profits at the cost of the individual.”

“The rent is to be reviewed in an upwardly direction only on the 15th anniversary of the the commencement date (1st January 2014) and will then be reviewed on each successive period of 15 years. On the first five review dates the rent will either be double the previous rent or 1/1000 part of the Capital Value of the property whichever is greater. On the sixth review date and every review date after that the rent review will be based on the capital value of the property”

The freehold is owned by Adriatic Land 4, which hides its beneficial ownership behind nominee directors and has its freehold assets managed by Will Astor’s Homeground / Long Harbour group. 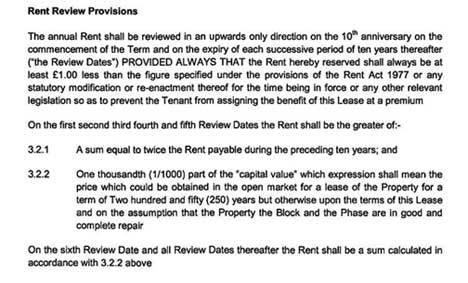