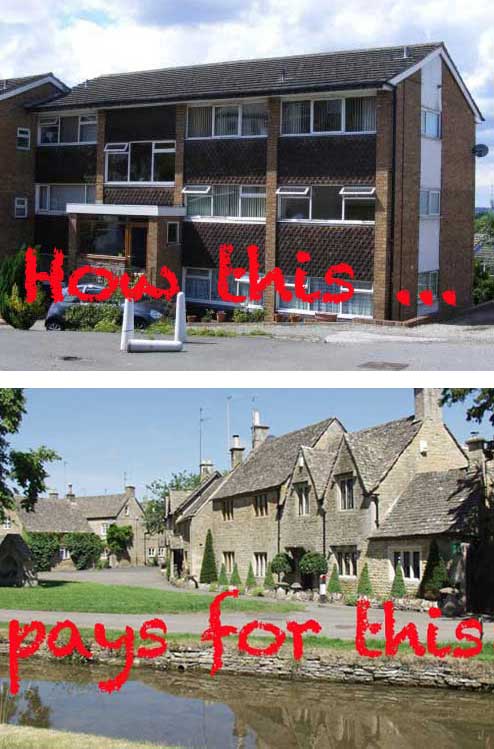 An affluent couple living in the idyllic Cotswold village of Lower Slaughter are funding their lives through leasehold property cleverness that is costing poorer property buyers thousands of pounds.

Martin Paine and his wife Margaret Anne Kirmond are benefiting from the sale of flats at Blythe Court in Coleshill, Birmingham, which have a trap in the lease that ends up costing homeowners thousands a year.

The lease terms are so unobvious that so far four – and possibly seven – firms of solicitors acting for buyers have failed to spot them.

Kadian Kennelly, 32, a social worker and first-time buyer, paid £58,000 for 7 Blythe Court flat on October 7 last year and was told by her solicitors that the ground rents would be £250 a year.

She was horrified later to be presented by Martin Paine with a demand for a ground rent of £8,000 a year.

The ground rent increments, which double every ten years, are so designed that in 90 years time they will amount to more than £4 million a year.

“I feel absolutely devastated by this,” says Kadian. “I sank my savings into this flat and borrowed off a friend to buy it, although I now have a mortgage.

“This is just blatant exploitation of obscure legal rules to prey upon the naïve, the poor or the very poorly advised.”

Martin Paine, who is not a lawyer, presented the ground rent demand as “head of legal services” of Circle Residential Management Limited on behalf of the freehold-owning company Mercia Investment Properties Limited. What he does not tell residents is that both companies are ultimately owned by him or his wife Margaret Anne Kirmond.

“My solicitor did not spot what is a deliberate trap in the lease,” says Kadian. “This means Martin Paine and his wife are now in the position to extract this money from me, or force me to sell and take a chunk of the proceeds.

“Put frankly, their behaviour is repugnant.”

Kadian has fallen victim to perhaps the worse scam in leasehold, explained in detail here

On February 9 2011 solicitors acting for a previous owner, who had died, agreed to a deed of variation to extend the lease by 99 years added to the 50 years already existing. So, 149 in total.

In fact, hidden in the document is a clause that means that this extension does not start from 2011 – as all these solicitors have assumed – but from 1961, when Blythe Court was built. The lease variation also doubles ground rent every ten years from an initial £250.

Kadian is far from being the first victim-owner at 7 Blythe Court.

“It was a nightmare for more than three years that cost everyone involved a lot of time, effort and money,” says Herring.

He sorted the problem out by taking a professional negligence action against his conveyancing solicitors, whose insurers paid up.

As part of the deal the flat was sold to Martin Paine’s company Kirmond PP Investments Limited (of which he owns 100 per cent) for £30,000.

Carter evidently decided to get out quick after receiving the £8,000 a year ground rent demand, and the flat went to auction again in July, but did not sell.

In September, it was set to be auctioned again when Kadian purchased the flat for £58,000.

In October, Martin Paine demanded his £8,000 ground rent dating back to March 2015: in other words, for nearly two months when the flat was actually owned by the Paines’ own companies.

Kadian and her solicitors had agreed to pay outstanding ground rent when she purchased the flat, believing this to be no more than £250.

“All I was trying to do was to buy a flat so that I could commute to work,” says Kadian. “I have fallen into a deliberate trap set by Martin Paine to catch the unwary and their solicitors.”

Kadian used solicitors John W Dawes of Newport, who could not jettison her fast enough when the scale of the disaster unfolded.

Having informed Kadian in writing that her total ground rent would be £250 a year for the flat and £10 for a garage that she had also bought, John W Davies could not make it clearer that the £8,000 a year ground rent that subsequently emerged was her problem alone.

On December 2 the solicitors told her that they had received the demand for £8,000 and she had agreed to pay outstanding ground rent and service charges from March 2015.

Martin Paine bought the freehold to Blythe Court on September 15 2004.

At first he seems to have behaved like most other freeholders, extending the leases of two flats by 99 years the date of the application.

In total, six other flats in the block are in the same position as Kadian. All have lease extensions for 144 or 149 years and ALL are dated back to 1961. (The numbers differ depending on the date of the extension application in order to add up to a 99-year extension to the lease.)

Advised by solicitors, they extended their lease with Martin Paine. But rather than extend the lease by 99 years from the date of application as they thought, the lease was increased to 144 years dating from 1961.

“We brought the flat in 2007 and renewed the lease to start from that date,” Sarah explains. “Me and Chris were both on minimum wage when we purchased this our first property together.

“We literally scraped all the money together that we could to do this as we wanted to stand on our own two feet.

On top of the ground rent, the couple, who now have a three-year-old daughter Aimee, have to pay the service charges as well and contributions to insure the building, as do all the leaseholders.

Ground rents of £1,000 would typically be seen in areas such as Knightsbridge or Chelsea, rather than Colehill, Birmingham.

“We feel that we have been utterly conned.”

The couple almost certainly had a valid claim against local solicitors Waters & Co, who advised them. The firm was well aware that there were issues with the leases at Blythe Court, writing to Paine on September 3 2007:

“May we respectfully remind you to check the calculation of the ground rent in the lease. We had dealings with a property recently in the same development where an error was made in this regard and the lease in its new form would have been completely unworkable insofar as payment of the ground rent is concerned.”

The Cherrys did, in fact, take the matter to the Legal Services Ombudsman, and were repaid Waters & Co’s conveyancing fees of £707.94.

Unaccountably, they then did not proceed further with a claim against the solicitors in the courts.

In January this year, the Cherrys again protested about the £1,000 ground rent to Martin Paine, which they were having difficulty paying.

On January 6 Paine emailed saying that “The freeholder [that is, Mrs Paine] is willing to look at a revised rent review mechanism for your lease.”

But he made clear that the landlord would need compensating for loss of income and he urged the Cherrys to take legal action against their solicitors Waters & Co using a no-win no-fee solicitor found on the internet.

But, Mr Paine, was sensitive to the issue of a six-year limitation period on professional negligence claims.

“… however, I can see that it is also arguable that your “sufficient level of knowledge” occurred after the last rent review date in 2011 when the first £1,000 rental payment fell due … I think it is vital that you immediately seek legal advice (some firms offer a no win no fee negligence claim service, try a google search).

“I also think that the date of any admission made by Waters & Co will be critical in deciding on the commencement date of the limitation period.”

They had previously been tenants in the property.

They are paying this off with £75 a month instalments, increasing to £100 in six months’ time.

“We are from Poland and we had no idea that you could buy a flat with these sorts of problems,” says Patrick. “We have put all our money into this flat and now we learn it is unsellable and almost worthless.”

Patrick and Wieslawa contacted their solicitors Birchall Blackburn Law, who had carried out the conveyancing when they bought the flat.

The firm wrote a detailed letter to Paine in May 18 2015, hoping to sort out what they imagined was a simple lease extension error.

Five months later on September 2, DF Legal replied on behalf of the Paines’ company Mercia, rejecting the arguments and explaining that backdated rent had been upheld in the case Bradshaw v Pawley 1979.

On September 18 Birchall Blackburn Law told Patrick and Wieslawa that it could not act for them as “we consider there is a conflict of interest”.

Having carried out the conveyancing, the solicitors are aware that Patrick and Wieslawa will almost certainly seek redress from them.

Sir Peter Bottomley MP, who campaigns for justice for leasehold flat owners, says that Blythe Court is a scandal.

“I am shocked by this unjustifiable attempt to devalue a home and to extract a fortune.

“It is illegal to stop someone on the highway and to take the contents of their wallet.

“It should be illegal to impose unfair leasehold terms that have the same effect.

“The law and the courts should give protection, retrospectively when necessary.

“Unfair terms need to be condemned and declared unenforceable.”

In addition, a draft version of this article was send to him, and received, on Monday January 18.

He claims that the article is inaccurate, but has declined to provide details.

He has acknowledged that he is not a member of the Housing Law Practitioners’ Association, as was stated on the Circle Residential Management website.

Paine’s website also has the undertaking in its code of practice: “To deal with Tenants both in the spirit of the legal requirements as well as in the letter of the law.”

He has been contacted for a statement prior to the publication of this article.

Telegraph reports that leasehold newbuild flats are on the rise
Next Post: Stop auction of ‘worthless’ flat at Blythe Court and alert authorities, Commons asked