Donate
You are here: Home / Commonhold / Telegraph reports that leasehold newbuild flats are on the rise 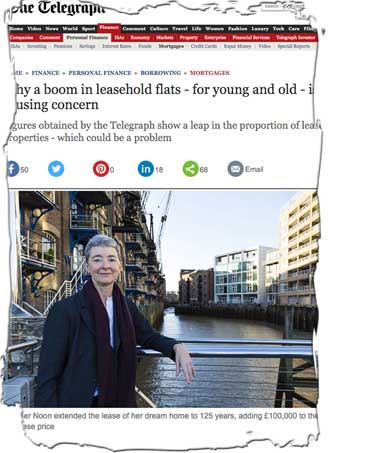 A good article in the Telegraph about leasehold newbuild flats being on the rise.

They make up 43pc of all newbuild registrations with the Land Registry, compared with 22pc in 1996.

Persimmon has being doing a lot of this in Peterborough, as reported in the Daily Mail here

Sebastian O’Kelly, a director of Leasehold Knowledge Partnership, is quoted saying: “We are producing huge swathes of new leasehold homes. Older people are being encouraged into retirement flats, but these are nearly all leasehold.

“First-time buyers in flats and houses are being caught. Elderly and novice buyers are being forced into a tenure they do not always understand and where they have few rights.”

The truth of the matter is that given the huge advantages of leasehold to create sustained revenue streams, it is bound to grow.

Doubtless, housebuilders would like nothing better than to turn all the British people into tenants, embed long-term revenue streams and then flog the freeholds to offshore entities.

We need to stop them doing this.