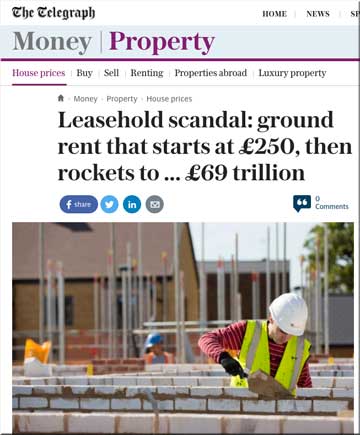 The Daily Telegraph website has reported the issue of eye-watering ground rent multiples sold to homebyers by mainstream developers.

“Developers tend to sell the freeholds before they start building. Professional ground rent investors are involved in the process and the terms that are devised can be complex – meaning buyers do not necessarily understand what they are getting in to.”

He also said the issue was “hushed up” by many leaseholders, because they did not wish to draw attention to what is effectively a defect of the property.

Sebastian O’Kelly, of the Leasehold Knowledge Partnership, is quoted referring to the term “virtual freeholds” as “marketing cobblers”.

Last summer LKP urged McCarthy and Stone to stop using the term, and it did so.

“Rather than talking nonsense about ‘virtual freeholds’, housebuilders should be providing brief resumes of the key lease terms,” he said.

The article also references Tory MP Sir Peter Bottomley telling the All Party Parliamentary Group on leasehold reform this week that these ground rents, while legitimate, were “clearly undesirable” and “sharp practice”.

LKP poised to mine information on leasehold, after being admitted to Open Data Institute
Next Post: Taylor Wimpey CEO says doubling ground rent scandal under ‘review’. But Bottomley asks: ‘Have innocent homebuyers been shafted?’