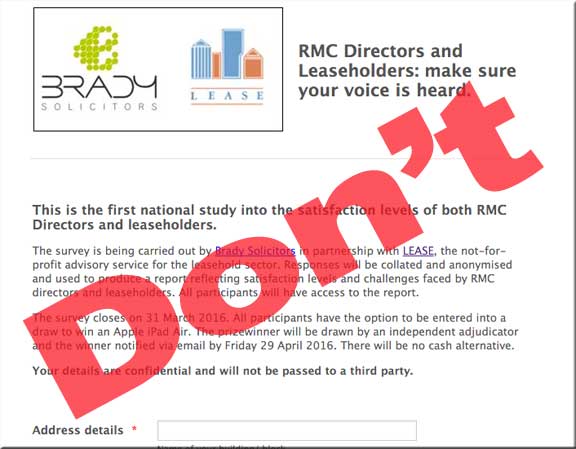 The Leasehold Advisory Service has dismayed key leasehold groups by handing over an important survey of leaseholders to Brady Solicitors, in Nottingham.

The survey aims to gauge leaseholder satisfaction, with a particular emphasis at blocks of flats run by resident management companies and RTMs.

In other words, data concerning the most empowered leaseholder-controlled sites in the country would be given to solicitors who habitually work for freeholders.

LKP’s advice is to have nothing whatsoever to do with it.

It astonishing that this survey has been farmed out by the taxpayer-funded quango, which is publicly funded solely because the leasehold sector is notorious for its monetising enthusiasms. Those who take part are asked to provide name, address, phone number, age range and contact email.

It has also been pretty hard-nosed working for clients such as Benjamin Mire, which involved a breach of confidentiality threat against an elderly leaseholder.

The survey does say the information will be anonymised, and that details will be kept confidential and not passed to a third party.

But it adds: “Brady Solicitors may call you to discuss your feedback and identify any areas in which you may like to investigate obtaining help or support.”

The purported aim of the survey is “to produce a report reflecting satisfaction levels and challenges faced by RMC directors and leaseholders”.

This, too, is alarming. Why has LEASE decided that this is an area of priority? The chairman of LEASE has emphasised that a considerable number of inquiries – even most, on the day he manned the phones – concern RTMs and RMCs.

This is absolutely not our experience at LKP.

We do know of RMCs and RTMs where there have been failings and fallouts.

We have reported the case of the London RMC director Brian Copsey, an accountant, who stole £1 million from his neighbours’ funds

But these complaints are dwarfed by the habitual leasehold gameplayers seeking to monetise their freeholds in ever more imaginative and often dubious ways.

LKP, the Home Owners’ Alliance, AgeUK and the FPRA are now in discussions about producing an alternative, independent survey.

We encourage readers not to complete the survey.

The LEASE press release on the survey is below:

The UK’s first ever independent national survey of the country’s 4.1 million leaseholders, a ground-breaking survey developed by LEASE, is launched today, 11 January 2016.

The survey has been developed in conjunction with property law firm Brady Solicitors, with the aim of assessing levels of satisfaction amongst the UK’s leaseholders and residents management company (RMC) directors. It is live online at www.bradysolicitors.com/survey2016 for leaseholders to contribute until the 31 March.

Leasehold properties are being built at a rate of close to 120,000 per year but currently there is no definitive understanding of what is desired – both in terms of the build of the property and the management services that are subsequently provided.

LEASE urges all leaseholders, and RMC directors to have their say by taking part in this unique and important piece of research into the leasehold sector in England and Wales.

The research will provide valuable information for government ministers, and the industry’s regulatory bodies, and, importantly, will help the sector’s service providers, the managing agents, to understand how and where they need to improve, whilst assisting leaseholders to better understand their rights and responsibilities towards both their property and their fellow leaseholders.

“Working alongside LEASE, we hope that through this research, we can help leaseholders and the companies that manage their properties, to work better together and ensure the leasehold sector can be a successful source of new homes for the UK’s growing population.”

Leaseholder activists rejected for positions on LEASE board

Realities of leasehold spelled out during the Housing Bill
Next Post: Telegraph reports that leasehold newbuild flats are on the rise