Donate
You are here: Home / News / MPs turn out in force to welcome leaseholder demonstrators at Westminster

MPs turned out in force this morning to meet leasehold demonstrators organised by the National Leasehold Campaign, most of who arrived by coach from the North West.

Sir Peter Bottomley and Jim Fitzpatrick, patrons of LKP and co-chairs of the APPG on leasehold reform, were on hand, as was Justin Madders, the deputy chair who is moving a Bill in the autumn to make enfranchisement and lease extension a simple multiple of 10 times annual ground rent.

The demonstrators from the North West were joined by those in the South East, temporarily pushing aside the EU remain protestors from their pitch at Old Palace Yard, which they have occupied for months.

There will be an article in the Guardian tomorrow. The Mail on Sunday was on hand. And BBC news footage was taken.

The demonstrators wore burgundy T shirts and cheered on by a trans woman leaseholder in a wedding dress, who added a striking note to the event. 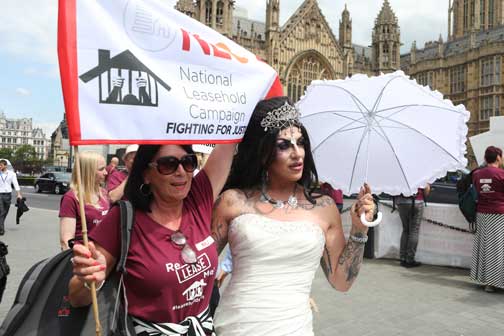 Ellesmere Port & Neston MP, Justin Madders was pleased to lend his support when leasehold campaigners from across the country descended on Westminster for a lively and good-spirited demonstration. The campaigners, who later presented a petition at 10 Downing Street, are seeking to highlight unfair terms in the sale of thousands of new homes across the country.

Katie Kendrick gets Rightmove to include full leasehold listings, while LEASE does nothing (as usual)

APPG July 11: Robust debate over retirement ground rents and event fees
Next Post: APPG hears agony of Grenfell cladding on private sites, while Lendlease sites head to tribunal to get leaseholders to pay