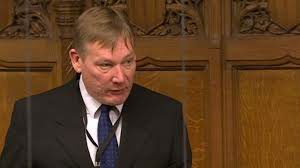 … and he is one of Parliament’s ‘slimiest, nastiest MPs’, according to Nadine Dorries

New housing minister Kris Hopkins will not be a full minister of state like his predecessor Mark Prisk, but an undersecretary of state.

That means he is two steps down from his boss, DCLG Secretary Eric Pickles, not one.

The former army officer, media lecturer and former leader of Bradford council (like Pickles) will have fewer responsibilities in terms of policymaking.

It is unlikely that leasehold and its many injustices will figure as a high priority.

It is an open question whether the leasehold round-table discussions will be continued.

The down-grading of housing in the coalition comes at the same time that Jack Dromey, the Labour housing shadow, joined the shadow cabinet.

Unlike chartered surveyor Mark Prisk – who was respected by Labour – Hopkins has no professional experience of housing, although it is listed as an interest.

One person who is not a fan is fellow Tory MP Nadine Dorries who marked his promotion by saying he was one of parliament’s “slimiest, nastiest MPs”.

That may not be as damaging to his reputation as Nadine imagines, however.

Campaign against retirement leasehold exploitation  / LKP readers should not be too dismayed.

We are now dealing directly with a dozen MPs and Cabinet ministers who are having to confront leasehold issues.

By investigating and explaining abuses in a clear, authoritative manner, LKP / Campaign against retirement leasehold exploitation has ensured that leasehold is far better understood at high level.

The housing incumbent at DCLG – which has always been complacent over this issue – is less important.

We have paid up for repairs to the lead water mains that doesn’t happen. We are so fed up, we are selling
Next Post: Pickles to stop councils charging leasehold owners more than £10,000 for major block repairs. But will it help many?