Donate
You are here: Home / News / Oldies should sell up and boost retirement housing, says Demos (in report paid for by developers) 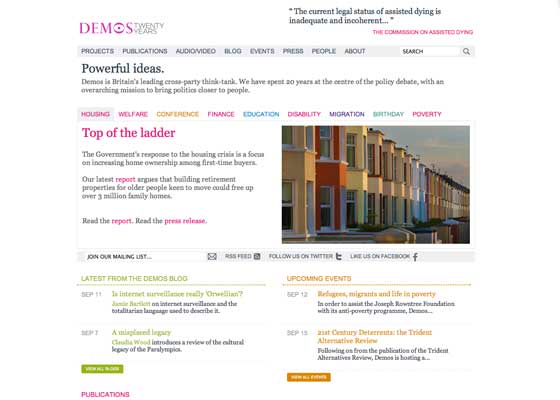 A report into retirement housing from the think-tank Demos is getting air time today – saying that if oldies wanting to buy a retirement property were able to do so it would “free up” £307 billion worth of housing.

The full report, titled The Top of the Ladder,  can be read here

And the first point to make about it is that it arrives thanks to “generous funding” by the Home Builders Federation.

Although McCarthy and Stone and Churchill Retirement – controlled by the McCarthy family – are quoted several times, there is no mention of problems in the sector.

Sneaky revenue generating clauses in the leases and dishonest management practices, which have both been the subjects of Office of Fair Trading investigations, go unmentioned, as do scores of court cases where residents have repeatedly demonstrated sharp practices over commissions and padded service charges.

The fact that more than half the private retirement freeholds are owned by the Tchenguiz Family Trust and are heavily indebted is also unmentioned.

The report deals with what it calls the UK’s ‘next housing crisis’ – the chronic undersupply of appropriate housing for older people.

It reports that while retirement properties make-up just two per cent of the UK housing stock, or 533,000 homes, with just over 100,000 that are privately owned.

The study then asserts the following:

Retirement housing should be given special planning status to encourage its growth, Demos argues.

In a section called “obstacles to supply” – where the existing controversies in the sector are completely ignored – local authorities are again blamed for not pushing through retirement housing applications.

Blaming planners is standard stuff from house builders, and it is disappointing to see Demos repeat such piffle.

Until very recently banks were not lending to retirement housebuilders – and with good reason:

McCarthy and Stone has been in hock to HBOS since its scandalous £1.1 billion sale in 2006 (orchestrated by disgraced HBOS banker Peter Cummings, who is banned for life from practising as a banker).

Churchill Retirement last month announced it has “£500 million” to buy new sites. Other developers such as Pegasus are also making bullish noises.

But McCarthy and Stone reported that only 1,600 private retirement properties were completed last year – a figure that has absolutely nothing to do with frustrations with planners.

Demos continues by saying that consumer demand was restricted by an “aversion to age segregated housing”, according to Hanover, or “ghettoisation”.

But a Demos survey of 1,500 over 60s found “considerable appetite” for downsizing. It claims that 58 per cent of people said they would consider this, which it says equates to over 8 million people nationally.

“People in semi-detached and detached houses and those who owned their property outright (with no mortgage left to pay) were more likely to consider moving in the future. Those in slightly larger and more expensive properties were also more likely than average to say that they would consider moving.”

This information echoes that provided by developers such as McCarthy and Stone, the average age of whose customers is 79.

Demos lists a range of reasons why oldies are discouraged from opting for retirement living – stress, packing belongings, loss of family home etc – but does not include the most blatant: that the retirement housing market has such an appalling reputation.

Demos concludes by making the point that stimulating the retirement housing market would be low-cost and simple: “the costs associated with overcoming the challenges of housing an ageing society are relatively small, because the money to stimulate supply of new housing, built by the private sector, is there already – locked up in over a trillion pounds’ worth of assets held by older people across the country.”

This is correct. Campaign against retirement leasehold exploitation wholly supports a strong and growing retirement housing sector … but not one based on the failed and discredited model of the past.

Guardian reports Leasehold Knowledge Partnership
Next Post: Do we have to replace our boilers for a £20,000 ‘repair to a modern standard’? »