LKP’s responses to this have come courtesy of the Guardian: 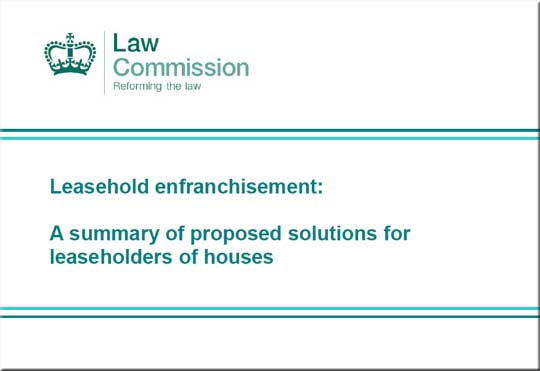 Millions of homeowners caught in the so-called “leasehold trap” may be able to buy their freeholds at a fraction of the price currently demanded by ground rent companies, under radical proposals from the Law Commission. One proposal is for a simple formula where leaseholders will pay just 10 times their current ground rent to convert their property from leasehold to freehold.

The leasehold system is a money-making racket. Reform is long overdue | Sebastian O’Kelly

This week, the Law Commission fired the opening shot at the murkiest and most lucrative corner of the residential property market: the leasehold system. Leasehold simply means long tenancy and it is unique to England and Wales.

“While there are a number of welcome measures, these proposals represent little more than tinkering around the edges of a deeply unfair system.

“Too much emphasis has been put on defending the interests of freeholders. Nothing in the measures proposed reflects the fact that some of the biggest and most wealthy developers have exploited their position to rip-off leaseholders.

“The only option with the potential to level the playing field is a simple formula to calculate the value of the freehold. Adopting a more complex system as the proposals suggest would perpetuate a completely unbalanced system, which would continue to allow freeholders to game the system for their own benefit.

“Ultimately this entire process looks set to fail at delivering fairness to leaseholders, because the terms of reference require the Law Commissioners to ensure that ‘sufficient compensation is paid to landlords.’ The Government is in danger of falling at the first hurdle if they back down when confronted by vested interests.

“If we do not see a more robust proposal in the September consultation paper, I am putting the new Housing Minister on notice that I will seek to use every parliametary measure available to deliver justice for leaseholders.”

A radical proposal to make it easier and cheaper for homeowners to escape the so-called “leasehold trap” and buy the freehold of their houses has been put forward by the Law Commission.

69% of new houses in NW are leasehold. Many owners stuck in limbo. And ban fleecehold covenants, says Maria Eagle

APPG hears agony of Grenfell cladding on private sites, while Lendlease sites head to tribunal to get leaseholders to pay
Next Post: Canary Riverside’s lawyers at Trowers & Hamlins in ‘ill-conceived’ bid to thwart Parliamentary debate