Donate
You are here: Home / Latest News / Right to manage in chaos after Court of Appeal decision 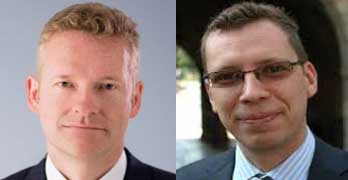 UPDATED with analysis of the decision below

Right to manage legislation is in chaos following Friday’s Court of Appeal decision to prevent RTM companies from managing more than one building at a site.

The decision drives a hole through current RTM legislation and, in LKP’s view, can only be addressed with primary legislation.

It means that any detached buildings on a site cannot be managed by the same RTM company.

The victory of the landlords – who included Vincent Tchenguiz and Israel Moskovitz – came about with the combined efforts of barristers Phillip Rainey QC (above, left) assisted by Justin Bates (right).

In another example of “harakiri” leaseholder litigation, residents of the two of the three RTM companies appeared in person with minimal legal representation, proving yet again that those who represent themselves in court have a fool as a client.

Curiously, Phillip Rainey QC had been rather sniffy about the “cottage industry” of lawyers blocking RTM applications at the LKP Commons briefing in January, but has now demonstrated he does not mind visiting the cottage himself on occasion.

The Court of Appeal ruling means only a self-contained building can achieve right to manage.

Time for Parliament to stop the lawyers thwarting right to manage

The decision of the Court of Appeal now opens the appalling prospect that sites of multiple blocks that have won right to manage – often after years of blatant ripping-off – could find landlords coming back to court to reverse the decision.

It will also almost certainly prove a smart-alec’s charter with lawyers pointing that as there is a garage or a garden shed somewhere on site the leaseholders can’t take control.

The decision is also a painful rebuff for Judge Siobhan McGrath, president of the residential property tribunal, whose Upper Tribunal ruling in favour of the right to manage in these cases has just bitten the dust.

Her ruling is here

The only positive note is that this victory makes an overwhelming case for revisiting RTM with primary legislation.

As we see a number of RTMs fail in the courts in the next few months, it will reinforce the point to politicians – and, more importantly, the wider government – that the legal set-up and management of flats needs attention.

Owners of flats should not be going through this nonsense to take control of the management of their property, and all new flats should be built with resident management companies to avoid the need for RTM.

For the moment, though, the lawyers can applaud their cleverness and count their winnings.

Bates has been an unashamed toady to the commercial interests in leasehold for some years now, and seems to be the go-to guy if you want an RTM derailed.

Rainey, on the other hand, is more detached, fully acknowledging the unfairnesses facing leaseholder litigants.

“There is currently a cottage industry in resisting RTM because acquisition of the right is beset by technicality and because, if the landlord wins, he gets his costs, but if the tenants win, they don’t,” Rainey observed at the Leasehold Knowledge Partnership’s round table held at the Houses of Parliament on January 29.

A point all politicians – and civil servants – should ask is why are landlords so desperate to hold on to the management of a site, given that their only legitimate sources of income – ground rents, reversionary values of leases, development potential – are unaffected by the process.

While a few landlords do allow their sites to choose RTM, many more have a range of strategies – spreading division among leaseholders being the obvious first step – to subvert the process before its gets to court.

Until late last year, the government also had no real information on how effective the RTM legislation has been.

But the number of RTM companies is disappointingly small: only 4,500 since the 2002 Act came into force.

Legal measures to resist it have gathered pace over the years, creating the “cottage industry” for the legal profession that Phillip Rainey noted.

The Court of Appeal decision is a blow to the property tribunal’s attempts to deal with a multiblock site opting for RTM.

The president Siobhan McGrath thought it important enough to sit herself in the Upper Tribunal to consider the issue.

She also noted that the leaseholders might still choose to serve separate RTM notices for each block “for the sake of clarity”.

The Court of Appeal ignored this.

“If it was permissible for an RTM company to acquire the management of more than one building, it could lead to absurdities whereby the RTM company managed different blocks on different estates in different parts of the country,” he says.

Such “absurdities” seem to be a figment of a barrister’s imagination.

As far as we know, no RTM has ever applied to run disparate sites in different parts of the country nor can we think of any reason why they would.

There has, however, always been a clear logic to why they would want to run a single RTM to cover multiple blocks in a single development, which is how the site would run under the control of either a landlord or an RMC.

The key paragraph of the Court of Appeal decision is 57, where the judges conclude from Hansard there never was an intention to allow multiple blocks in an RTM application.

What the judgment does not mention was that there had been amendments proposed to address this failure in the legislation. Unfortunately, it seems those amendments were never adopted.

Perhaps this is why more than 10 years has past with the courts trying to make up for the weakness in the legislation.

Within the decision, Lord Justice Pattern, Lady Justice Gloster and Sir David Keene go on to consider why a multiblock RTM would be a problem.

“There was obvious potential for conflict of interest between the leaseholders of different blocks on a range of matters.”

It then sets out the examples of when this could occur such as “one block might wish to undertake major works (e.g. at a particular time) whereas the other might not.”

To a lay person, these arguments seem no more than speculation. It is the leaseholders who have asked to create a single RTM in the first place.

The residents want no more, or less, control over a site that that which exists under the landlord’s management. In many cases, residents already have management over a multiblock site owing to a residents’ management company (RMC) having been set up at the start by the developer.

Why should an RTM be different in only being able to manage a fragment of a site? Why should there be “obvious potential for conflict”, which is somehow unique to RTM but accepted as perfectly normal in an RMC?

The lease determines the apportionment of costs, so why is it “likely that the members belonging to the larger block would dominate decisions referable also (or even solely) to the smaller block”, as one of the examples given by Philip Rainey QC?

Even if one block were somehow to seek an advantage, the leaseholders still have the full protection of s19 to determine that costs are reasonable and reasonably apportioned.

The judges then go on to accept the suggestion from Mr Rainey “from a practical point of view there would be nothing to prevent two or more RTM companies, which were established in relation to separate blocks on the same estate, from entering into an agreement to delegate management to one of the RTM companies, or indeed a third party manager, to act on behalf of both or all: the articles explicitly provide for delegation; RTM companies can also appoint agents.

Paragraph 54 of the decision records “Moreover in my judgment the Upper Tribunal’s conclusion (viz. that a composite right to manage a number of separate premises could be acquired by an RTM company) wrongly paid no regard to the consequential dilution of the rights of members who were qualifying tenants of individual premises.

“Such dilution was simply not justified by the relevant provisions of the Act or the Regulations.”

Practically, this suggestion seems some distance for the real world.

On a large development with 10 blocks, that would somehow mean 10 different RTM companies with ten boards of directors. Ten sets of meetings to consider ten sets of issues for every item that impacted on the site.

The poor managing agent would be required to issue ten sets of accounts and make ten separate s20 consultation processes for each bit of major works and then face dozens of nominated contractors for every project.

The Tribunal could be burdened with ten s20ZA applications for dispensation in the case of emergency works. Then the site will need 10 audits.
It is possible the residents would not get on, as the Judges suggest, which could give rise to a situation where ten different managing agents were running the ten blocks and spending their time cross-charging each other.

Far from producing an ideal solution, as the judges seemed to believe, this would be a bureaucratic nightmare.

RTM company 1 might agree to manage the site overall, with the consent of companies 2-10, but if a leaseholder in the block managed by company 7, say, defaulted on service charges would the property tribunal accept that RTM 1 could be deemed entitled to act against leaseholders in RTM7?

And who would be liable for the costs if the landlord lost and would there be any means to recover funds from the nine unaffected RTM companies?

The decision seems to reinforce the misconception that leaseholders should not really be trusted to know what’s best for them and even if they ask for a single RTM what they need is something else.

All in all, the decision leaves a mess that government will have to address.

The 2002 Act could and should have covered both estate and multiple blocks.

It clearly never has addressed the alternative world now proposed of a site with multiple RTM’s.

No.1 Deansgate wins epic RTM battle, as freeholder throws in the towel at the Court of Appeal

Recognised tenants’ associations should be easier to form
Next Post: Whistleblowers to Serious Fraud Office ‘wasting their time’