Donate
You are here: Home / Ground rent scandal / Savills and Allsops: Why ground rents from people’s home are just so ‘attractive’ 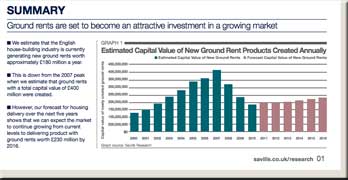 Here is a good example of how the sector – that blob of property interests, from builders to offshore investors – view swathes of peoples homes in leasehold England.

In 2012 Savills analysed the ground rent market, and did a pretty good job.

“Ground rents are not conventional real estate investments. Whilst owning a ground rent brings with it both rights and responsibilities that are shared with owners of other forms of property, ground rents have some unique characteristics.

“These come together to produce an investment that is unusual in the property sector, but which can be very attractive …

This was written before LKP revealed the scale of doubling ground rents from the likes of Countryside Properties plc and Taylor Wimpey.

Reversionary ground rents in 2017 – an oldie but a goodie – Allsop

From the vantage point of the rostrum, in unprecedented economic times with historically low interest rates and persistently low inflation, the reversionary ground rent market (freehold ground rents sold subject to shorter residential leases) has been quietly picking up momentum in recent years. And why not?

Savills report continues: “Because the ground rent is usually a nominal sum, the leaseholder is incentivised to pay under the threat of losing their property if they fail to do so and therefore the risk of default is minimal.”

Of course, with these aggressive ground rents the risk of default is far higher.

“In the event of a leaseholder default, the leaseholder’s mortgagee will typically pay to avoid forfeiting their security and should there be further default, the freeholder has the right to forfeit the lease and gain vacant possession of the property. Default is therefore extremely rare.”

Actually, this is just a guess. A parliamentary question from Labour MP Emma Reynolds was pushed aside as “too expensive” to find out about forfeiture.

Martin Boyd, LKP trustee, then rummaged around Ministry of Justice archives to find 130 forfeiture cases are brought, so we can guess around 65 cases a year are granted.

It predicted a market of £230 million new freeholds sold off by 2016, and predicted strong growth.

Savills was right. LKP reckons the figure is higher. From developer annual reports, we reckon that between £300 and £500 million of freeholds are sold by developers every year. The figure has been widely reported in the national press.

Ground rents – where are the opportunities? – Allsop

About 20 years ago, Dorrington’s Residential MD Trevor Moross, then President of the British Property Federation (BPF), asked me to his office to discuss the cumbersome sales mechanism for ground rents dictated by the Landlord and Tenant Act 1987. Basically, landlords wishing to dispose had to offer their interests to their lessees first at a fixed price.

It seems that the Government is doing everything it can to make life difficult for the buy to let investor. First the phasing out of higher rate tax relief, then a 3% hike on stamp duty. And even if that hasn’t deterred you, London prices have risen significantly making investment in many parts of the capital expensive.

£19,200 a year ground rents at Crawford Building are not our problem, says Redrow

Leasehold houses have at last got the scandal of ground rents into the nation’s consciousness. But this is much worse …
Next Post: Buyers would have ignored ground rent clauses even if we had told them, says conveyancer Rob Hailstone