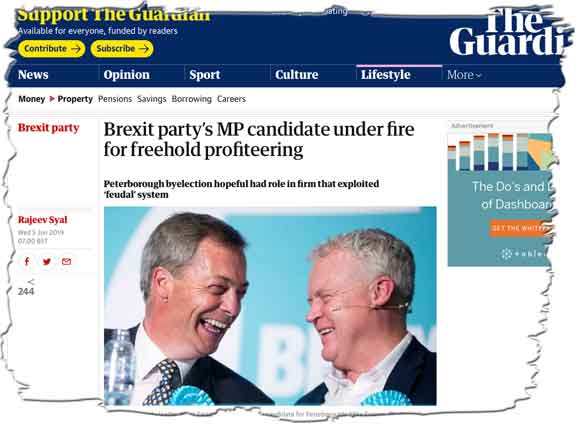 Mike Greene, the Brexit Party’s candidate who is expected to win the Peterborough byelection tomorrow is a former director of E&J Ground Rents.

This means he was a former business partner of Winchester-based James Tuttiett, who has turned E&J Capital Partners into one of the biggest players in the residential freehold game.

Mr Greene’s former role as a ground rent speculator is reported in the Guardian today.

Communities Select Committee chair Clive Betts MP is quoted: “Ordinary people are being ripped off by greedy management companies who exploit them to make an inflated profit. It shows the Brexit party’s true colours as a Thatcherite party with no concern for the people of this country.”

The Guardian quotes leasehold house owner Anna Higham, 42, who paid £268,995 for a four-bedroom detached house on the Chapelford estate in Warrington in 2012. Her freehold is owned by E&J Ground Rents No4.

She pays £300pa in ground rent – more than the 0.1% of purchase price and therefore onerous – and it is review upwards every seven years.

Ms Higham says she was verbally reassured by the developers that she would be given the first opportunity to buy the freehold, but it was sold on to E&J.

“It is taking advantage of people,” Ms Higham says. “We had a plan to be able to own our own home, but it could be that I have been paying off my mortgage for nothing. I am angry that I am in this position.”

A spokesman for Greene insisted that he was a member, not a director, of E&J No4 and was never an active participant in running the investment vehicle.

“The investment was made seven years ago and was disposed of, from memory, to a pension fund five years ago.

“The investment is a recognised product and he participated as such. He never actually owned the freeholds. This was about ground rents, which are seen as a safe investment,” he said.

Savills and Allsops: Why ground rents from people’s home are just so ‘attractive’