The Leasehold Advisory Service chief executive Anthony Essien is to make it clear to advertisers with the taxpayer-funded organisation that this does not constitute “membership” of the organisation.

Mr Essien has been alerted to the cases below, as has the housing minister Gavin Barwell, LKP patron MPs Sir Peter Bottomley and Jim Fitzpatrick, and Justin Madders MP, who has been critical of LEASE in the Commons.

Mr Essien told LKP this afternoon: “We will make clearer that there is no membership in having an entry in the [professional] directory.”

Mr Essien further confirmed that the advertising ban on the services of chartered surveyor Benjamin Mire, his company Trust Property Management, and any company that he is involved in remains in force.

It was imposed in July 2014 https://www.leaseholdknowledge.com/lease-dumps-benjamin-mire-eight-months-dithering

Mr Mire was called before the RICS disciplinary committee last year, but owing to unaccountable errors in the procedures the case was dropped. He is, however, deemed to be unfit to hold judicial office, having once held a part-time post with the property tribunal.

Miss Cohen has claimed that this article is misinformed and has requested that it is removed.

Michael Epstein last night posted comments concerning the original Facebook exchange, but these have been removed.

Comments on this article are closed. 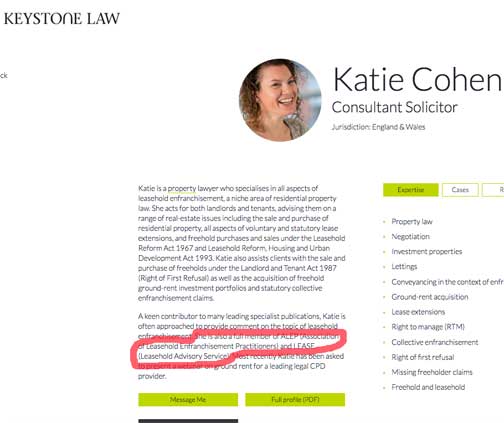 Katie Cohen, a solicitor at Keystone Law, has today removed claims of being a “member of LEASE” from her firm’s website claiming that she is victim of a Facebook “vendetta”.

Miss Cohen is the second solicitor this year to remove this misleading claim from her firm’s website.

No such membership exists, and Anthony Essien, the CEO of LEASE, informed Miss Clift:

“I want to make clear that our directory does not constitute a list of recommended practitioners.”

Miss Cohen appears to have joined the National Leasehold Campaign Facebook group, which has attracted the attention of a number of legal firms seeking instruction from aggrieved leaseholders.

There was an exchange of views with other members – now deleted – and Miss Cohen announced that she was removing herself from the group.

“I find myself in a position where my personal integrity has been questioned,” she writes. “I’ve never needed to “tout” for business or even justify my existence in the way I had to yesterday. It was an offer of help and nothing more. I wish you all the best in your campaign.”

But it then emerged that Miss Cohen described herself as a “full member of ALEP and LEASE” on the Keystone Law website. ALEP, the Association of Leasehold Enfranchisement Practitioners, is a trade body with a subscription membership.

The issue of LEASE membership was raised by LKP trustee Martin Boyd, in correspondence marked “for publication”, and copied to Mr Essien.

“At one stage I was involved with LEASE as part of their voluntary telephone advice service and previous firms have been a full member of LEASE – as this is clearly a vendetta against my existing firm for reasons unbeknown to me, I will ask my firm to delete any reference to LEASE in my profile.”

The reference to LEASE membership has now been removed. 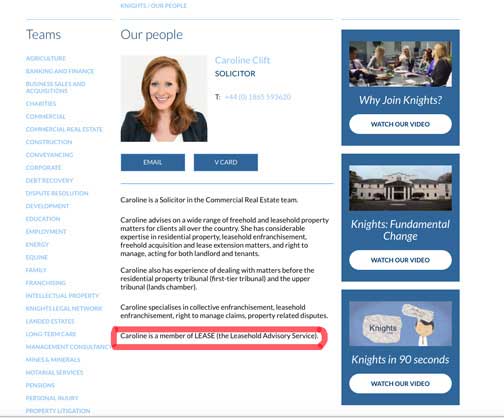 Caroline Clift also exhibited confusion over membership of the Leasehold Advisory Service when the matter was raised by Sebastian O’Kelly, an LKP trustee, in January. The correspondence was copied to LKP patron MPs Sir Peter Bottomley and Jim Fitzpatrick, and Justin Madders, MP for Ellesmere Port and Neston, as well as Anthony Essien, CEO of LEASE.

“At the time that my bio was drafted my firm had paid to be one of the firms who were recommended by he Leasehold Advisory Service. It must have came from that.

“Unfortunately, I have not looked at my bio for sometime. Having now done so in view of the fact that I do not think we renewed our subscription I accept this does need to be updated and I will ensure that this is done today.

“I apologise for not keeping an eye on this and for any confusion.”

This response prompted Mr Essien to make clear that the professional directory of LEASE does not constitute a list of recommended practitioners.

LKP has asked Mr Essien to inform all advertisers in the LEASE directory not to claim membership of this government funded organisation.

LEASE: Find some backbone, or face the chop!