Deep Sagar (right), the chairman of the Leasehold Advisory Service, is to decide whether Benjamin Mire be permitted to continue to advertise in quango’s professional directory.

It costs Mire, the CEO of Trust Property Management in north London, £519 plus VAT to do so.

Last summer, the chartered surveyor resigned his judicial appointment to the property tribunal.

In an unusual move, the Judicial Conduct Investigations Office made clear that he would have been sacked because he had:

“failed to observe the standards that could reasonably be expected of a judicial office holder and that this failing was sufficiently serious to justify his removal from office”.

Mire (below) has appeared as a representative in cases before the tribunal 52 times since 1999. 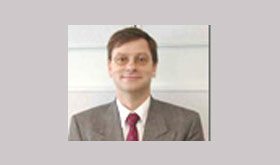 Leaseholders complained to the Judicial Conduct Investigations Office that there was a blatant conflict of interest with Mire appearing as a frequent litigant at the tribunal and sitting on the panel.

“If LEASE takes money or advertising from Benjamin Mire or any business with which he is associated I think you should end it without delay.”

On January 18, LEASE chief executive Anthony Essien informed the veteran MP that there would be a decision in “two weeks”.

“Some issues have arisen that have resulted in the process taking longer than we would have hoped to have reached a resolution,” wrote Essien. “But we expect to have completed the process within the next two weeks and will of course update you.”

On February 24 there was still no decision and the matter had passed to LEASE chairman Deep Sagar.

“I have forwarded it to my Chairman who will be responding to you very soon,” Essien wrote to Sir Peter.

Deep Sagar is familiar to readers of LKP.

Last summer Deep Sagar threatened LKP with legal action demanding the removal of the “Wibble-wobble” post, which criticised the quango. The offending Wibble-wobble post is here

This was followed by Deep Sagar employing RMPI Solicitors to demand the removal of readers’ comments from the site.

He also objected to LKP’s approach to making inquiries into his many and varied public appointments. RMPI, which said it was representing Sagar in a personal capacity rather than as LEASE chairman, sent two letters to LKP.

LKP has not removed any item from the website as a result of complaints from Deep Sagar. It did offer to delete offensive remarks, rather than entire posts, but RMPI declined to address this.

Times reports inquiry into dodgy freeholders
Next Post: Tchenguiz backs down over £5,000 demand for … a conservatory built 25 years ago