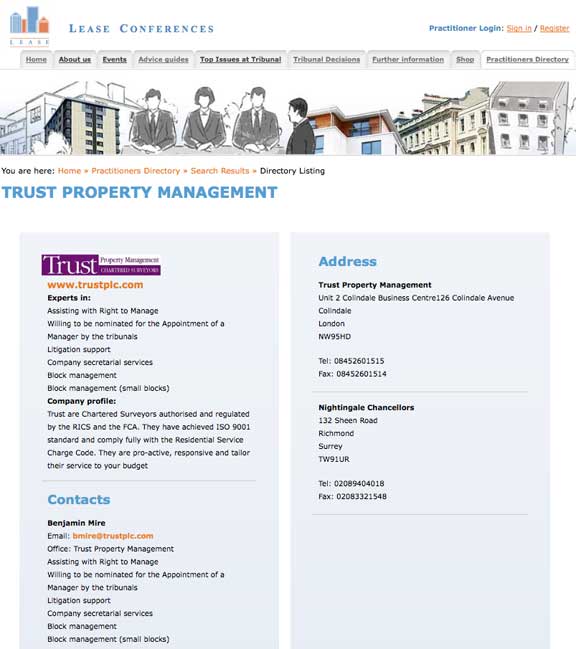 Sir Peter Bottomley has told the chairman of the Leasehold Advisory Service Deep Sagar to stop advertising the services of  Benjamin Mire – or resign.

Mire, the chief executive of Trust Property Management based in Colindale, north London, is a chartered surveyor who sat as a panel member of the property tribunal until he resigned in the midst of an investigation last summer.

In an exceptional move, the Judicial Conduct Investigations Office made clear that he would have been sacked in any case. He had:

‘failed to observe the standards that could reasonably be expected of a judicial office holder and that this failing was sufficiently serious to justify his removal from office’.

Yet the Leasehold Advisory Service has continued to promote Mire’s company in its professional directory, for which Trust pays a fee.

Unsuspecting leaseholders could engage a company that has been before the property tribunal on more than 50 occasions. The company has been criticised in tribunal rulings.

Sir Peter Bottomley’s  patience has finally snapped with the Leasehold Advisory Service, which has dithered over whether or not to continue promoting Benjamin Mire and Trust Property Management since last November.

What to do about Mire has been a buck passed between Deep Sagar – who has a string of diverse public appointments (see below) – and LEASE chief executive Anthony Essien.

After repeatedly stating that a decision was imminent, Essien finally told Sir Peter on April 1 that LEASE would CONTINUE to accept advertising from Mire and Trust.

Essien made the decision after having “had the opportunity to consider carefully all the evidence offered by you and others, and by TPM [Trust Property Management]”.

Now Sir Peter has bluntly told Deep Sagar “it is wrong that LEASE in any way provides a channel for leaseholders to be introduced to him or his ‘service’?”

“Put to LEASE Conferences [the quango’s commercial branch], to the LEASE Board and to the LEASE executive all that is known to LEASE, to the Judicial authorities, to DCLG, to Justice, to the Property Chamber and to the Leasehold Knowledge Partnership and to Campaign against retirement leasehold exploitation about Trust Property Management.

“Please let me see all that you know is known. I suggest you put it to your sponsoring Department [the DCLG].

“Consider again why for another moment this contract is in the interests of leaseholders or of LEASE?

“You should review this appalling situation and if you or the LEASE executive cannot or will not take the right action, I do not see how you can avoid leaving your position.”

Deep Sagar has been left in no doubt that this issue will be raised in the Commons after the Easter recess.

Deep Sagar, who was once employed by CocaCola, has a string of diverse public sector appointments. These range from Flood Risk Management Wales to the Information Standards Board.

Deep Sagar served as chairman of the Social Security Advisory Committee for only six months. A similar period of time was spent at NHS 24, a telephony service in Scotland, and with the Barnet Group.

Deep Sagar threatened LKP with legal action last summer if it did not remove the critical ‘Wibble wobble’ post about LEASE.

He then employed RMPI solicitors, acting for himself, to demand the removal of readers’ comments on the website.

LKP declined to do either, although it stated that it was prepared to remove mildly insulting remarks from the website if that were insisted upon, but RMPI discontinued the correspondence.

Deep Sagar was contacted for a statement.

Anthony Essien informed LKP: “Deep Sagar is currently travelling outside the UK and so is unable to respond.”

Deep Sagar is invited to comment when he returns.

Benjamin Mire and Trust Property Management have also been contacted for a statement.

Deep Sagar’s public appointments are / were: