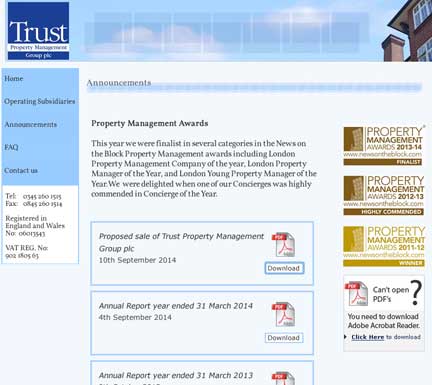 Mire, a property manager based in Colindale, north London, has been engulfed in controversy over the past 18 months.

He resigned his judicial appointment in the summer of 2013 during an investigation by the Judicial Conduct Investigations Office into his conduct.

But last November the Ministry of Justice made clear that Mire would have been sacked in any case. He had

‘failed to observe the standards that could reasonably be expected of a judicial office holder and that this failing was sufficiently serious to justify his removal from office’.

Mire has been named on several occasions in the House of Commons.

Sir Peter Bottomley has referred to the “disgraced and disgraceful” Benjamin Mire and urged LEASE, the Leasehold Advisory Service, to remove advertising from the quango’s website of all his companies.

After eight months of dithering, LEASE did so in July this year.

“By an expert review on my behalf of the determinations and representations, I have concluded that 24 determinations have clear and recent conclusions of poor professional practice.

“Thus LEASE Conferences Limited should not knowingly offer its platform to these firms, as its objectives are to improve professional standards and service consumers, including leaseholders.”

In November last year when the Ministry of Justice made clear Mire was to be sacked, Trust Property Management was up for four property management awards organised by the insiders’ trade magazine News on the Block.

It has won News on the Block awards on previous occasions, which are prominent on its website next to the sale notification.

Peverel rebrand: something to be flogged off?
Next Post: Hanover has sold 21 retirement house manager flats