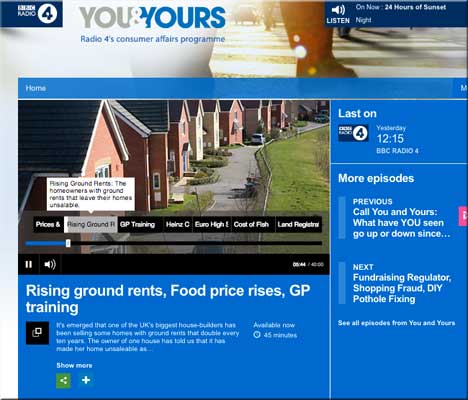 But its explanation that doubling ground rents compared to those linked to RPI amounted to “slightly less than 1% of the average sales value of the property” was dismissed as “not true”.

The programme interviewed first-time buyer Clair Scott, one of 24 buyers at Taylor Wimpey’s Silver Birch Close development in Lostock, Bolton, where ground rents double every ten years from an initial £295 a year to £9,440 in 2060. The houses are now difficult, if not impossible to sell.

But Taylor Wimpey repeated to the BBC what it had already told LKP and the All Party Parliamentary Group on leasehold reform last week:

“These leases were introduced in 2007 with an average difference in capital value compared to a Retail Price Index lease of slightly less than 1% of the average sales value of the property,” said Taylor Wimpey.

Louie Burns, of Leasehold Solutions, which specialises in enfranchisement and lease extensions, said:

“We have had specialist enfranchisement lawyers and valuers trying to decipher Taylor Wimpey’s statement and we still do not understand the clear meaning of their press release.

In a package called “The homeowners who can’t sell their homes because of soaring ground rents”, You and Yours referenced MPs accusing Taylor Wimpey of “sharp practice” and “corporate irresponsibility”.

Miss Scott, who gave evidence last week to the All Party Parliamentary Group on leasehold reform and was reported on LKP here, said of the doubling ground rent: “At no point was this raised by our solicitors that this was a particularly severe issue and it could have resale issues in future.

“At no point were we told that we could buy the freehold.”

Miss Scott, who is pregnant, said buyers of her house had pulled out after their lawyers read the ground rent terms. Mortgage lenders would not advance loans to these properties, it was claimed.

Taylor Wimpey sold the freehold to the site for £176,000 to E & J Capital Partners, based in Winchester When Miss Scott approached them to buy the freehold to her house she was told it would cost £46,000.

Miss Scott, who appeared upset during the interview, was asked what effect the issue is having on her: “Many sleepless nights. It is extremely stressful. We won’t be able to sell the house. Solicitors will be telling their clients not to buy houses like this. So this does not go away for us.”

It is understood that a senior executive of Taylor Wimpey has now offered to meet Miss Scott to progress a way forward.

Mr Burns was asked why developers are building leasehold houses rather than freehold ones:

“To make money,” he replied.

“Developers offer these terms because they make additional money on them. The ground rents are ridiculously onerous on those terms, but they [developers] all do it.”

Statement to BBC from Taylor Wimpey

“These leases were introduced in 2007 with an average difference in capital value compared to a Retail Price Index lease of slightly less than 1% of the average sales value of the property.

We reviewed this mechanism for ground rent increases in 2011 and decided that the RPI was a more appropriate measure going forward. All Taylor Wimpey homes on developments commenced after 2011 have been sold with ground rent increases linked to the RPI. All purchasers have independent legal advice from a firm of solicitors when purchasing a property from us.

Until recently, we hadn’t been aware of the concern of some customers and homeowners regarding these pre-RPI clauses and the difficulties that they are currently experiencing in selling or mortgaging their homes. While we understand that this is an industry-wide issue, having heard the cases described and in order to establish the facts, we are undertaking a review of this situation as it relates to our customers.

We will be liaising with the affected customers, including Ms Scott, as part of this review in order to understand the detail behind their freehold valuations.”