Donate
You are here: Home / News / Tchenguiz: is this the end? 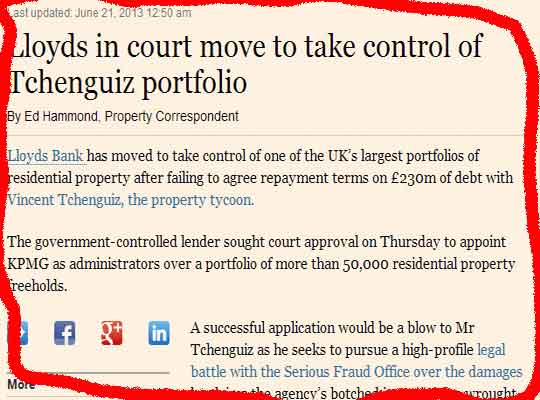 Vincent Tchenguiz may be poised to lose a fifth of his freehold portfolio after failing to agree repayment terms on a £230 million debt with Lloyds Bank.

The taxpayer-owned bank sought court approval on Thursday to appoint KPMG as administrators over more than 50,000 residential freeholds.

It is not known which portfolios these may be. It is possible that these are the entire retirement leasehold freeholds which Tchenguiz acquired from McCarthy and Stone. These amount to the freeholds of 53,000 retirement flats.

If so, the implications for those in retirement sites where the freeholder is a Tchenguiz company – Fairhold, Proxima, Retirement Care, Estates and Management among many others –  could be wide-ranging.

It would open up the possibility of a number of different companies purchasing the retirement freeholds, who may not chose to continue with Peverel as the managing agents.

Court papers show that Lloyds claims Tchenguiz has failed repeatedly to make interest payments since 2009. He has also failed to sell the entire freehold portfolio, which Tchenguiz priced at £3 billion.

On Thursday Tchenguiz’s lawyers argued that the botched Serious Fraud Office investigation – which resulted in the arrest of Vincent and Robert Tchenguiz in March 2011 – had compromised efforts to refinance the freehold portfolio.

The freeholds were used as collateral for the £100 million Pennyrock loan provided by the Icelandic bank Kaupthing, which was central to the SFO investigation.

According to the FT, which claims to have seen Tchenguiz’s court filings, his defence against calling in the administrators concerns conversations that took place between Lloyds Banks and accountants Grant Thornton, who were the receivers for Kaupthing and who wrongly alerted the SFO which resulted in the Tchenguiz arrests.

The hearing has been set for July 8.

Tchenguiz gets a reprieve from Lloyds Bank

Tchenguiz speaks and he is going to ‘butcher’ his enemies