(Sounds like an email to LKP from an aggrieved leaseholder …) 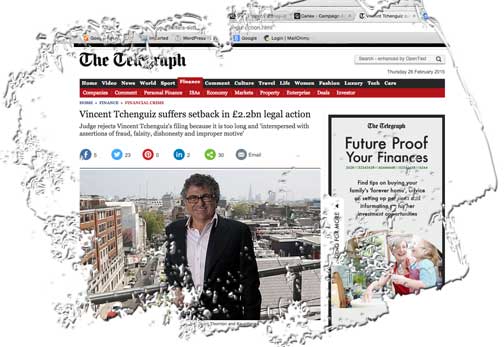 Vincent Tchenguiz’s £2.2 billion legal action against accountants Grant Thornton has suffered a set-back as his documentation was described by a judge as “too long and failed to make clear the facts of the case”.

Tchenguiz wants compo from Grant Thornton which he believes was responsible for his arrest, with his brother Robert, in February 2011 by the Serious Fraud Office.

This was based on incorrect evidence, which resulted in taxpayers compensating the brothers to the tune of around £3 million each, plus legal costs.

But Vincent’s claim against Grant Thorton has encountered a hitch as Mr Justice Leggatt described his submission “some 50 pages of narrative, liberally interspersed with assertions of fraud, falsity, dishonesty and improper motive which are not at that stage particularised”.

“Statements of case must be concise. They must plead only material facts … and not background facts or evidence. Still less should they contain arguments, reasons or rhetoric,” Mr Justice Leggatt ruled in London’s Commercial Court on February 20.

The court’s rules state that a filing’s maximum length should be 25 pages, whereas Mr Tchenguiz submitted 94 pages.

The Telegraph’s full report can be read here

Mr Tchenguiz’s residential freehold portfolio, deeply indebted and long for sale, amounted to one per cent of the UK total including those of the majority of retirement sites, fancy London riverside sites and the city of Huddersfield.

These were combined with ownership of Peverel, the UK’s largest property manager, which went into administration after the brothers’ arrest.

Tchenguiz speaks and he is going to ‘butcher’ his enemies

No.1 Deansgate wins epic RTM battle, as freeholder throws in the towel at the Court of Appeal
Next Post: 20% of ARMA members ‘walk out over new ethical scheme’