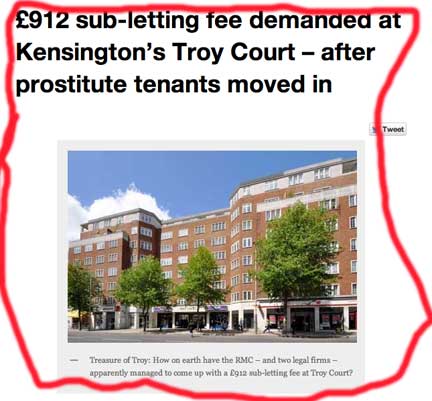 The Kensington leasehold resident who faced a demand for a ludicrous £912 sub-letting fee for renting out her flat has had the sum reduced by £360, after contacting Leasehold Knowledge Partnership.

The property manager Blenheims has conceded that Claire Jenkinson should not have been invoiced £360 (inc VAT) for the freeholder’s undefined legal expenses.

It is yet to be established whether Ms Jenkinson should have been charged anything at all.

Troy Court’s right-to-manage company decided to introduce a “licence to sub-let” after undesirable short-term tenants, including prostitutes, moved into the prime block of flats at the entrance to Holland Park.

But no such “licence” is mentioned in the lease, and the Land Tribunal has made numerous rulings last year limiting sub-letting fees to £40 plus VAT where no figure for sub-letting consent is given in the lease.

“I feel about 160 years old after all this,” said Ms Jenkinson. “Blenheims, acting for the RTM, has gone into this feet first and without due thought to the correct legal process or understanding of our leases.

“What makes me more angry is that I only received an invoice detailing these legal firms involved because I repeatedly persisted in asking for one.

“I cannot thank LKP enough for all its guidance and support with this – and just as I was on the brink of caving in and writing out the mighty cheque for £912! “

Julian Harper-Brown, of Blenheims, contacted Leasehold Knowledge Partnership on Friday insisting that “under the terms of the lease at this building a licence to sublet is required and our clients, who are the RTM company, have instructed us to inform lessee’s that they require this licence when they sublet their flat”.

He continued: ”Although we are aware of the fact this has not always been enforced in prior years, the RTM company at the request of the Residents Association have told us as that this is now to be the case.”

The RTM company’s solicitors, Ashfords LLP, were contacted to establish their fees for this licence, which come in at £480 inc VAT.

Blenheims had demanded an additional £360 inc VAT for Taylor Wessing, the freeholder’s solicitors, as well as their own fee per licence of £72 in VAT.

But then it back-tracked. Mr Harper-Brown said:

“However having reviewed the documents there is only an obligation to notify the superior landlord and it is not necessary for their legal team to be involved. Therefore the second set of solicitor’s fees are not relevant in this case.”

It also emerges from Mr Harper-Brown’s statement that Ms Jenkinson could, in fact, use a solicitor of her choice to draft her licence. “Unfortunately she has declined to acknowledge this offer to you,” he added, claiming that LKP’s report was “one-sided and uniformed”.

In fact, if Ms Jenkinson decides to notify the RTM herself that she is sub-letting her flat in accordance with her lease she would save this legal bill as well … and, in short, carry out all the obligations that she has done on the two previous occasions when she had a tenant.

Ms Jenkinson understandably was not tempted to ask a lawyer of her own to attempt to draft a “licence” that she did not think she needed, and which is not provided for in her lease.

Chairman of the RTM company Alan Greenhalgh is now involved and has asked to see Ms Jenkinson’s lease.

“As a reasonably new RTM company we have been involved in getting the finances of the building sorted out, as well as establishing a proper 10-year plan for major works etc,” he explained.

“We were asked by the residents’ association to manage licences to under-let and also licences to alter, as these had been issues that has caused residents a lot of concern.

“However, it is fair to say that given all the other issues we have needed to deal with to benefit residents, the licences to underlet have not been in our top 10 list. The residents’ association asked us to enforce it, so we did. I should add that this is not something that the RTM did on its own back.”

Ms Jenkinson is delighted Troy Court has won the right to manage its own affairs, and appreciates the efforts of the RTM on behalf of all leasehold residents.

She wanted to rent out her flat “by the book”, but correctly suspected that this licence to sub-let – in spite of the eagerness to issue invoices – had not been thought through.

Sub-letting leasehold flats should be around £40, LVT rules quoting precedent