Donate
You are here: Home / Latest News / ARMA pleads to be on Lord Best’s regulatory working group. It should be. And so should LKP …

And ARCO and ARHM 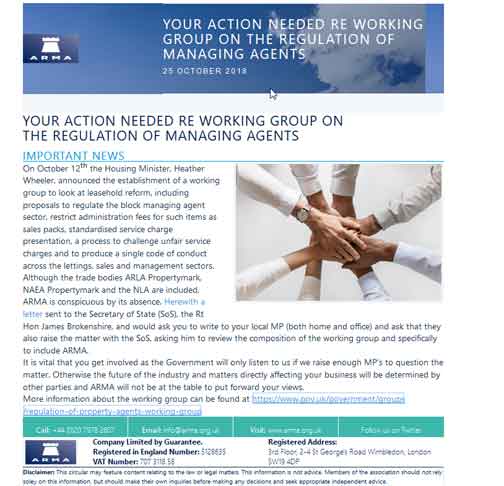 ARMA has written to Communities Secretary James Brokenshire asking to be including on Lord Best’s working group looking at the regulation of estate agents, letting agents and block managing agents.

It almost certainly should be, in LKP’s view, as should we, representing the interests of leaseholders who pay for the sector.

“We believe that to ensure any proposed legislation is practical and proportionate across the entire property industry it is vital for the block property management sector to contribute by being a member of the working group.”

All of which is fair enough, and LKP would say that the group might benefit more from the presence of ARMA than it would from the Leasehold Advisory Service, which is not directly involved in property management.

Of course, leaseholders should also be involved in this.

ARMA over-eggs the pudding a bit by adding: “ARMA would bring its experience of creating and running a Regulatory environment, establishing Codes and insight into the economics of the sector.”

The letter is co-signed by the CEOs of big managing agents who either get their business from developers or larger freehold owners, with the exception of the LKP-accredited HML Group plc, whose portfolio is made up leaseholder controlled blocks.

Warwick Estates co-signs the letter, which is curious as it demonstrated how not to behave in a regulatory regime: by resigning from RICS over a professional conduct ruling over management failings that had resulted in death, an earlier a criminal conviction and £120,000 fine.

It also threatened to leave ARMA if its regulator, Labour ex-minister Sally Keeble held a similar inquiry. She quite rightly resigned as ARMA’s regulator, leaving the organisation’s efforts at self-regulation in tatters.

The other co-signees – FirstPort, Rendall and Rittner, Mainstay, RMG – are the standard issue larger managing agents, which set the ethos of ARMA and who can be relied upon to champion the status quo in leasehold, as well as speak up for the commercial interests of their freeholder employers.

None, for example, are going to worry about a freehold – that is, a slice of ordinary families’ homes – being owned by a murky offshore entity where the ultimate ownership is hidden. Indeed, Vincent Tchenguiz’s Tchenguiz Family Trust, based in the British Virgin Islands, remains FirtPort’s biggest employer (as well as being its former owner). Still, at least the beneficial interest is known.

Not one of these large property management companies is big because of leaseholder choice.

It is ironical that LKP is championing ARMA’s involvement, which is always invited to LKP / APPG’s parliamentary meetings, as it goes out of its way to bar us from its own.

The subject of LKP being snubbed by ARMA over its annual conference this year, exasperated Sir Peter Bottomley in correspondence with CEO Nigel Glen.

Nonetheless, it should be contributing to Lord Best’s work, and so should LKP.

Government action on leasehold scandal has been ‘too weak and too slow’, says John Healey
Next Post: Even if you only respond to one question, take part in the Law Commission consultation!