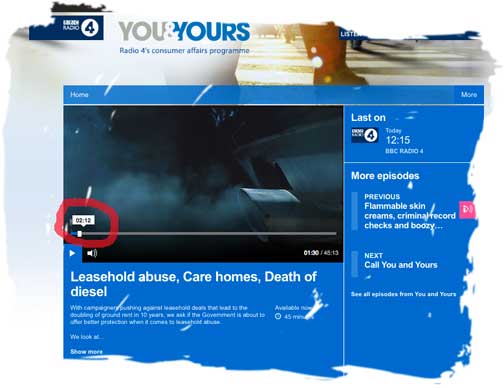 Sir Peter Bottomley MP, patron of LKP, told the BBC today that the “scandal” of the Leasehold Advisory Service being packed with freeholder stooges needs to end.

“The charity trustees of the Leasehold Knowledge Partnership should be regarded as qualified to be on the board of the government advisory service LEASE rather than disqualified,” he told the BBC R4 consumer programme this afternoon.

“That is another scandal: that you have people who are involved in helping landlords are sitting in charge of an advice service set up for leaseholders.”

Sir Peter was addressing the leasehold houses scandal after the programme ran a report by Simon Hoban of the demonstration at Ellesmere Port on Saturday.

The programme featured an interview with Katie Kendrick, of the Facebook group the National Leasehold Campaign, which organised the protest outside Redrow’s 2,000-home Ledsham Garden Village.

Questioned how the leasehold houses scandal could be resolved, Sir Peter said one option was a “super complaint” to the government “saying that these terms are so outrageous and so unfair then they would be rendered inoperative and they cannot be enforced.

“That would leave the so-called long term investors [of freeholds] not getting the income stream they want and save the leaseholders having to pay a great deal of money. It would be a short-term way of solving the leasehold problem.

“The long-term one is to allow leaseholders to convert to being freeholders. And the even better one is to bring in commonhold so that you never get the opportunity of things going wrong either on purpose or by mistake. But that may be a discussion for another day.

“The key point is that the poeple who are the innocents in all this are the leaseholders: often first time buyers, often helped under the government’s Help To Buy scheme.

“And they have now been exposed to a scandal that is even worse in my view than the PPI one.”

Sir Peter was then asked about Sajid Javid’s response to him in the Commons last week about adding leasehold abuses to the the Green Paper on consumer protection law.

“In the Green Paper I would like the possibility of cutting out the prospect of unfair terms completely.

“Secondly, making sure that there is complete transparency in all the fees and charges and insurance commissions – which some of the so-called long term investors appear to be basing their calculations on.

“I would instantly change the law so that just as leasehold flat owners can buy the freehold so should leasehold house owners be allowed the same right.”

‘If I fail to offend anyone, I will do it next time,’ Bottomley tells appalled leasehold professionals at LEASE annual conference