A company offering bungs to managing agents if they sign up for new gas and electricity supplies is being touted to … all the members of the Association of Residential Managing Agents!

An outfit called Energy Renewals is offering what it politely terms “incentive payments” of between £3,000 and £50,000 a year.

And the brilliant thing about it is that the leaseholders don’t have to be told anything about these payments and can be relied upon to keep paying up in blissful ignorance.

The incentives – which are rewards for spending other people’s money – can go straight into the pockets of managing agents, or freeholders.

The scope for these rake-offs is huge. Larger developments can spend £50,000 a year on communal electricity, and the heating bills will be considerable as well. 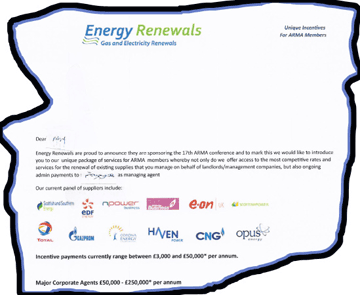 Leaseholders will be staggered to learn these “incentives” are being touted to ARMA members only a month after former civil servant Michelle Banks took over as the new chief executive promising a new ethical regime.

Banks, formerly of the Department of Communities and Local Government, is supposedly developing “an enhanced self-regulatory scheme” at the organisation.

It is doubly unfortunate that ARMA is promoting the “incentives” in the same month that the London Assembly issued a hard-hitting report on leasehold service charges, called Highly Charged, which condemned just these sort of kick-backs.

Energy Renewals is sponsoring ARMA’s annual conference in the autumn, and this sweetener will be cheering news for managing agents whose leaseholders have got wise to the great insurance swindle.

LKP has reported in the past that managing agents and freeholders can skim off up to 50 per cent in insurance commission – without leaseholders, who are presented with the bill, knowing anything about it.

Now along comes another incentive payment – or bribe, in common language – of which managing agents have no obligation to inform leaseholders and a huge vested interest to keep quiet.

In response to big money scandals uncovered at LVTs – including the £1 million pay-back to residents at St George’s Wharf, in Vauxhall – ARMA announced ARMA-Q, to provide ethical backbone for the trade body.

Outgoing chief executive David Hewett declared that this would be Banks’ first task at the organisation.

Allowing Energy Renewals to tout for business in this fashion is a depressing debut.

Tweets by @LKPleasehold
Previous Post: « £30,000 bill for RTM ‘fiasco’
Next Post: Sub-letting: LKP trials a simple scheme that benefits all »